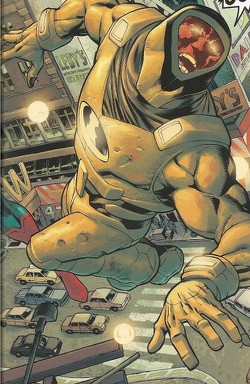 Nat Tryon was a small time criminal who was recruited by Lex Luthor to sabotage a nuclear reactor. When he was sickened by the radiation, Tryon needed a second dose of further radiation to cure him, which failed, instead turning him into a living nuclear reaction. He now wears a containment suit in the shape of a man in order to protect himself from dispersing as terribly destructive, explosive nuclear energy. During his first battle with Superman, Neutron was defeated and sent to S.T.A.R. Labs for incarceration as well as treatment. Unable to reverse his condition, S.T.A.R. Labs scientists kept trying until Neutron was freed by several super-villains. Neutron has been a member of the Fearsome Five, long-time foes of the Teen Titans, and he continues to operate alone at this point. Neutron has the power to release atomic energy through his hands or by lifting the visor in his helmet. Were his suit to be torn or damaged, further energy would be released, eventually leading to great destruction.

Later, Neutron was working for Intergang and Bruno Mannheim in Metropolis. Interrupting Superman's "Special Day" with his wife Lois Lane, Neutron attacked the city and Superman needed to leave breakfast unattended in order to stop him. During the battle, Superman purposely punctured Neutron's suit so that the Metropolis Technology Squad could absorb his energy and take him into custody again, apparently for further study and incarceration [Action Comics #654 (Sept. 2006)].