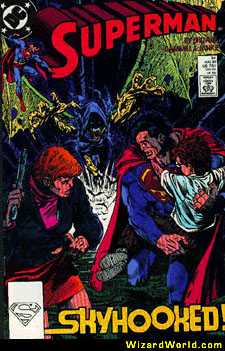 Dr. Aleister Hook in 1880's London was killed by townspeople for abducting children. Before he died, he'd pledged his soul to Blaze who converted him into a flying demon. Skyhook went from London by ship to Metropolis, where years later he again was abducting children and mutating them so they had wings. Superman first encountered Skyhook helping save Maggie Sawyer's daughter Jamie, and Skyhook apparently died in Metropolis' harbor. Some months later a revived Skyhook summoned Jamie and other children, before being impaled to death. When Superman first entered Blaze's dimension, Blaze summoned Skyhook to attack him. Much later, Skyhook reappeared in Metropolis again abducting kids, including Keith Robert.