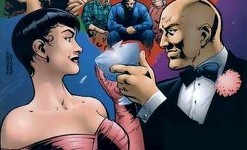 The Contessa appeared in Metropolis following Lex Luthor's public discreditation. She took leadership of LexCorp and owned a controlling interest in LexCorp International. Publicly, she appeared reputable. One of her actions was to disband Team Luthor and create a new security force, the Centurions, who worked with Alpha Centurion. The Contessa was also a patron of Dmitri Potempkin, an artist the public believed dead. Although she knew Luthor about 20 years ago, she still looks youthful. She met the rejuvenated Luthor and began working with him. They secretly married, and the Contessa became pregnant with Lex Luthor's child.

She assisted (with Lex's help) in donating the fabric needed for Superman's new containment suit, which Prof. Hamilton and Kitty Faulkner (along with Lois) designed in order for Superman to use and survive when he became an energy being. Following the birth of her daughter, Lena Luthor, Luthor had the Contessa sedated and "imprisoned" in an upstate hospital (SUP #131). She came out of her "coma", in spite of the fact that she would have to be superhuman to do so (AOS #555). She escaped when the hospital burned down (MOS #77). In league with Dabney Donovan, she had a Bizarro made, and kidnapped her daughter Lena from Lex. Although Lex retrieved the child (Superman Forever), she waited in the shadows, content to know that Luthor knew she was out there...

Until her past came back to bite her, forcing her to come out into the light of day when it was discovered that the Contessa and her linage are in fact "gifted" with long life, out-living those around them (Superman: End of the Century hardcover). However, the Contessa's son Luca (from a previous marriage) grew into a killing machine, lusting to bring death to those he deemed unworthy of living. Although the Contessa took measures to stop her son half a century ealrier, a culmination of events (involving Lex himself) resulted in Luca being set free to again go about his killing spree, though he was stopped due the intervention of Superman and the combination of magic involving the Contessa and Lena Luthor. Lena was once again returned to Lex, and the Contessa again vanished into obscurity.

In his efforts to become the President of the United States, Lex Luthor tied up loose ends, organizing the death of the Contessa with a barrage of missiles (President Luthor: Secret Files and Origins #1).