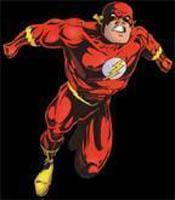 Also known as The Fastest Man Alive, The Flash is the world's most powerful superspeedster, and can easily travel through time and into other dimensions through careful use of his powers.

The Flash, as identified by the public, has always been considered one of America's leading super heroes, and a member of the Justice League of America. In fact, three men have assumed the mantle of The Flash.

The original Flash is Jay Garrick. He fought crime during the Golden Age, and was a founding member of The Justice Society of America. Still young at heart, and faster than the average superhuman, This Flash still fights crime, operating mainly in the midwestern metropolis of Keystone City.

The second man to be called The Flash was Barry Allen. He was a founding member of The Justice League of America, and a good friend of Superman. It is Mr. Allen, whose trademark scarlet costume has come to symbolize the identity of The Flash. Unfortunately, Barry Allen, as The Flash, lost his life while foiling an evil plan of the Anti-Monitor.

The Flash of today is Wally West. A protege of Barry Allen, West was originally Kid Flash. As an teenage crime fighter, he teamed with other super youngsters to create The Teen Titans. Now an adult, he tookover the identity of The Flash and followed in the footsteps of both Garrick and Allen. Assuming his place in The Justice League of America, The Flash primarily fights crime in both Keystone City and nearby Central City.

Because Superman and The Flash can run at super speeds, the public has always been fascinated by a race between the two heroes to find out who is truly the fastest man alive.

Most recently, West's Flash and Kid Flash Bart Allen appeared to disappear into the Speed Force in an attempt to imprison a seemingly insane Superboy-Prime during the "Infinite Crisis". A Flash -- who appears to be attired in the Barry Allen Flash costume -- recently reemerged out of the Speed Force just as a transformed Superboy-Prime also emerged.