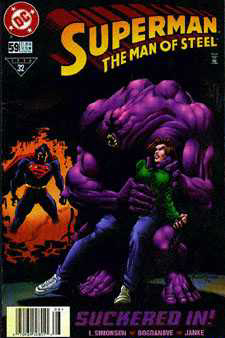 (Rudy Jones and Dr. Torval Freeman) Originally a menial slacker, Jones was transformed while working as a janitorial laborer at a Pittsburgh's S.T.A.R. Labs facility. Thinking a waste container might have held something valuable he opened it and was exposed to strange radiation that changed his body. Jones now had the ability to absorb the life energy of other people leaving withered corpses. When not feeding on life energy, he can feed on other forms of power, such as electricity.

Unfortunately for the scientist that was tending Rudy, he was tricked and ultimately absorbed into the Parasite. This joining was different than Rudy's others, he actually retained the scientist, Dr. Torval Freeman, as a part of his own mind (ACT #715). This combined intelligence makes the Parasite even more menacing.

Because Parasite can absorb Superman's energy, he is a formidable foe. The Parasite was recruited by Morgan Edge to be part of the second Superman Revenge Squad (ACT #736). Failure dogging every one of his encounters with the Man of Steel, Rudy just can't seem to have enough of his power. He returned to see what he could gain from the Superman after his powers were altered. At this point in time, Superman was not in full control of what was happening with his powers and nearly killed the Parasite (AOS #552). Later, Parasite returned looking to make trouble for Superman but found himself facing off against Supergirl instead (Supergirl #34-35).

Parasite's powers changed quite a bit after his involvement with Strange Visitor, an energy being remincient of Superman's electrical form. Rudy was used as a siphon of sorts to stablize the power for Strange Visitor. As power was drawn into his body, STAR Labs techs would make sure that it was siphoned off into holding containers so they would not risk his escape. It seems that Strange Visitor's contact with the Parasite changed his powers enabling him to keep what he took longer. Somewhere he and his scientist counterpart gained new powers by absorbing a shape-shifter as well. Now not only does he sap the life energy out of his victims he can actually become his victims right down to their DNA. Unknown to anyone, he saved a reserve of what he was siphoning and was able to gain his own release during the B-13 induced blackout on New Years Eve.

After he escaped from STAR Labs, he began to form a plan to get back at Superman. He began stalking Lois Lane and Jimmy Olsen in an attempt to get to those closest to Superman. He had taken the form of one of his previous victims, an old man, and was run down in the pandemonium that evening when Lois came to his aide. Not realizing that she was actually in contact with the Parasite, the simple touch was all Rudy needed to get the lowdown on Superman. Rudy was as surprised at what he learned by touching Lois because he never realized that she knew it all; the secret identity, everything. A new plan formed when he realized how close Superman actually was to Lois. He decided to take her place and tear him up emotionally by pretending to be the wife scorned. He even visited Lex Luthor and temped Luthor with what he always wanted since Lois took up interest with and ultimately married Clark Kent, a night alone together.

Parasite's ruse would probably have worked if he had not had enough of Clark's constant apologies, and attempts to get to the bottom of his and Lois' relationship problems got the better of him. In a fit of rage uncharacteristic of Lois Lane, Rudy punched Clark out of their apartment and into the streets of Metropolis. Shortly after this display, Superman got the Parasite to reveal himself in the guise of Lois Lane. Rudy couldn't handle the fact that anyone other than himself as the Parasite took down the Man of Steel. After that edge is lost to Rudy, things spiral downhill. His powers ebb and Superman succeeds in taking him down. Superman finally realizes the reason he has felt so weakened recently was because he was being constantly drained by the Parasite. When he asks Rudy how long he had been pretending to be Lois, he relates his story to the Man of Steel. In his final moments he tells Superman that he still needed to have contact with Lois once every twenty-four hours to maintain his charade, confirming that she is still alive. He also tells him that Lois loves him more deeply than he could ever know. He states that whatever is weakening Superman was not simply his doing but something bigger (later discovered to be nano-bot kryptonite poisoning). The Parasite dies before he can tell Superman where Lois is imprisoned (SUP #157).

Parasites body was taken to STAR Labs for examination and Luthor also tried to lay claim on the body. He dispatched his best to make sure they would have possession of the Parasite's remains. Lois was found alive amid a cave that the Parasite used as a feeding ground, saved by Superman and Batman.

Thanks to Ruin's experimentation, two more parasites have come onto the scene, one purple, the other green. Teenagers, Alex and Alexandra sought vengeance on the people who made their lives hard, and were subdued by Superman after battle. Their final fate remains unsealed.