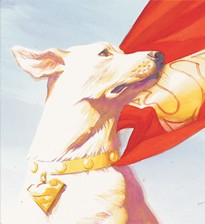 Bibbo Bibboski saved this lone puppy from a litter discarded by a woman on the docks of Metropolis. Since the young pup was the only survivor of his litter, Bibbo decided to name the puppy Krypton. Bibbo ordered a nametag for Krypton only to find that the proprietor only allowed six letters per tag. K-R-Y-P-T-O Disgusted by the man's attempts to swindle further money from his pocket, he took the tag as it was and decided on the name Krypto.

Contained within Lois and Clark's apartment, Krypto soon became restless, tearing up the place. So Superman took Krypto out for a fly. During their outing two meta-human criminals escape prison with the help of their crooked Attorney... but with Krypto's help, Superman captures them (MOS #112).

However on his next adventure Krypto was a little too successful, almost killing Mongul in a tussle between Mongul, his sister Mongal and Superman. So Superman confined Krypto to the Fortress of Solitude where he designated one of his Superman Robots to take care of the Superdog (SUP #170).

More recently, Kon-El, Superboy, has taken the dog into his custody and cares for the dog. From time to time, Krypto still aids Superman in battle.