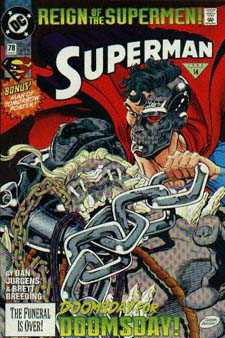 (Henry "Hank" Henshaw) - Hank Henshaw was the commander of a doomed shuttle mission for LexCorp. One of four participating astronauts, his wife included, they crashed after the experiment took a turn for the worst. Upon planetfall, two of the four astronauts perished, the strange radiation mutating their bodies terribly. Henshaw's wife alone survived without mutation thanks to Superman's intervention. While Henshaw's body was changed to pure energy, his mind survived as he found he could transfer it to LexCorp's computer system. Later Superman learned Henshaw could control and alter machinery, while easily moving his mind through conduits.

When Henshaw found out his existence was causing massive electronic disturbances, he used a NASA facility to beam himself to Superman's birthing matrix then still in Earth's orbit. Henshaw altered the Kryptonian matrix to create a propulsion craft, and over Superman's objections left Earth to explore space.

Following Superman's apparent death someone appearing to be a cyborg version of Superman, including having his DNA, appeared. The Cyborg Superman convinced many that he somehow was Superman reborn. During Henshaw's desolate journey through space he went quite mad and began to blame Superman for driving him away from the Earth that he loved. He especially blamed Superman for the deaths of the two astronauts and the revulsion his wife had shown towards him while in his mechanized form. Henshaw longs to be human again, and blames Superman for his cyborg existence (AOS #551). He has vowed revenge on the Man of Steel.

Partnered with the self styled warlord, Mongul, he caused the destruction of Coast City, before being apparently destroyed by Superman. Later the Cyborg ended up on the planet Apokolips in a dispute with Darkseid. When Superman was arrested by an alien tribunal, the Cyborg again tried to defeat Superman. After learning the Cyborg's true nature, the tribunal sentenced the Cyborg to death by teleporting him to a black hole. The Cyborg found himself in an alternate universe and encountered the Silver Surfer. He was trapped in the barrier of the Promethian Giants, where Superman found him.

Unknown to Superman, he hitched a ride back to Earth with him, where he began trying to make a more human machine (SUP #129). Disguising himself as her teacher, he was befriended by Ashbury Armstrong, who tried to convince Superman that there was still good in him. He and Superman appear to be mortal enemies - Superman insisting that Henshaw pay for all the deaths he caused in Coast City, and Henshaw resenting Superman as an alien more interested in punishing wrong-doers than in rehabilitating them. The Cyborg tried to take over Kandor but Superman threw him into the rift between dimensions where he seemed to be trapped (AOS #563).

Recently the Cybermoths that occupy the new Metropolis' underworld and their mysterious Overmind, were somehow in contact with the Cyborg as he wasted away between dimensions in the Phantom Zone along with the adrift City of Kandor. As John Henry Irons and Superman were creating the new Fortress of Solitude in the tesseract in the belly of the Steelworks refinery, the Cybermoths attacked and one of their agents, already inside the new Fortress, opened the vault to the Phantom Zone and released the Cyborg. After a fight with Superman, the Cyborg was driven off by the residents of Kandor lead by Cerizah, Ceritak's (Scorn) sister. The door was about to be secured when Luna, the official Cybermoth representative, mistakenly took the door for the Fortress' exit and drifted off, trapped in the Phantom Zone as well. The Kandorians were able to retain control over the Cyborg using the same technology he initially brought to Kandor on his earlier visit. He made this decree to Cerizah before they returned, "Kandorian, I PROMISE I will not forget your interference..."

What was surprising was that on Superman's return to the Phantom Zone he did not encounter the Cyborg again. This time he was attacked by demons masquerading as Kryptonians, namely Superman's ancestor, Kem-El (MOS #107). 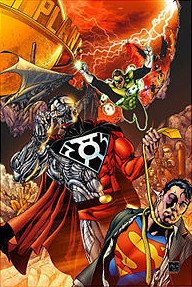 The Cyborg somehow escaped the Phantom Zone and became leader of the Manhunters, but he was destroyed and only his head was discovered by one of the Guardians and it was taken back to OA for study. When the Sinestro Corps, a group of anti-Green Lanterns who wish to overthrow the balance of the universe, invaded OA, they rescued the Cyborg. Henshaw, who revealed his only true hope was that he could one day finally die, agreed to help the Corps when the Anti-Monitor promised to grant that wish in return.

Sinestro gave Henshaw the duty of supervising construction of the new War World. However, while aiding the Corp during their attack on the Earth, the Cyborg was beaten back by Superman, Supergirl and Powergirl. Realizing the heroes will never kill him, Henshaw eventually made his way back to the New Warworld, when he learned the Green Lantern Corps had made the decision to destroy it. Hoping this will be the end he has long desired, the Cyborg hides himself on Warworld and is overtaken by the massive explosion. Soon though, his Manhunters detect his life signs and they find the remnants of his still living body. The Manhunters revive their fallen leader and Henshaw actually cries when he realizes he's still alive and that the tormented memories of his wife, who committed suicide when she saw Hensaw's mutated form, will continue.