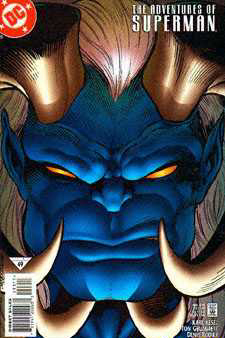 (Also known as Scorn) - Ceritak is the Prince of Kandor. His father was one of the elite council members whose job was to uphold Tolos' laws. Ceritak (being a rebellious individual) searched for a way out of Kandor. He spotted Superman phasing in and then out of Kandor's plane of existence, and dived after him, making it to earth's reality. As a stranger in Metropolis, he at first fought Superman, but soon proved to be an ally. He wore Superman's red and blue costume when Superman's powers changed, but eventually decided to make his own name in Metropolis. He is a friend of Ashbury Armstrong's, whom he saved from a kidnapper.

An alien and a building from Kandor mysteriously appeared in Metropolis, and Superman sought out Scorn's help in investigating (Action Comics #749). They, along with Ashbury, went to Kandor, to find that someone called The Inventor had been attempting to free the city by transporting it. He was actually the Cyborg, who then framed Superman for the death of Scorn's father Cerimul. Superman was arrested, and the Cyborg began to transport Kandor on top of Metropolis. Superman escaped and, with Scorn's help, trapped the Cyborg between dimensions. Scorn decided to come back to Metropolis, his sister becoming their father's successor as leader of Kandor. Soon after returning, Scorn disappeared, leaving only a note in his undecipherable language.