The Justice Society of America 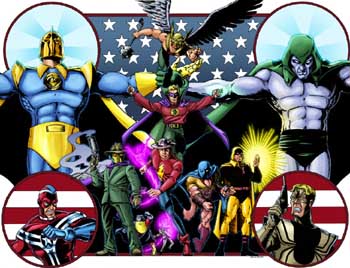 The inspiration for the latter Justice League of America, the JSA is America's oldest and most revered order of costumed crimefighters! Organized in November of 1940, the original roster was formed when President Franklin D. Roosevelt requested The Flash and Green Lantern to go on a secret mission to Scotland. Upon arrival, the two heroes encountered heavy Nazi opposition, and were subsequently captured, and brought before Adolf Hitler himself.

Mystically aware of the two heroes' dilemma, Dr. Fate summoned the assistance of The Atom, Hawkman, Hourman, The Sandman, and ultimately, The Spectre; and rescued the original duo from German forces. Along the way, Hitler, in possession of the fabled Spear of Destiny, commanded a corp of Valkyries to assault the White House, and murder President Roosevelt. Fortunately, the President was saved by the timely appearance of first The Atom, and then The Spectre.

From that point on, this gathering of heroes officially created The Justice Society of America, and helped America and its allied nations defeat the Axis empires for the duration of World War II. Along the way, many Golden Age heroes and adventurers either joined or assisted the JSA. They include: Johnny Thunder and his magical Thunderbolt, The Red Tornado, Starman, Dr. Mid-Nite, Wonder Woman, and even Hawkman's paramour, Hawkgirl.

The conclusion of World War II saw the Justice Society fight some of the original supervillains (such as The Wizard, The Alchemist, Per Degaton, Solomon Grundy, Lorelei) and even its first criminal counterpart, the original Injustice Society of the World. However, in 1951, the JSA defeated a group called Eliminations, Inc. The mastermind of this gang proved to be an international spy. The Joint Congressional Un-American Activities Committee wrongfully assumed that the JSA may be a subversive organization itself, and commanded the members of that time to appear before congress. When Senator O'Fallon demanded that members remove their masks as a gesture of patriotism, the heroes refused, and Green Lantern then teleported the members away from the hearing, and immediately, the collected membership of the JSA promptly retired from crimefighting.

Many years later, The Flash resumed his heroic career, and ultimately influenced other members to restart the Justice Society. Soon, the membership teamed with the newer Justice League of America, and from that point on, has maintained the existence of the organization to this day.

While several of the original members have died, the Justice Society still stands, side-by-side with the JLA, to defend America and champion justice throughout the world and the cosmos. The latest roster of the society includes the original Hawkman and Hawkgirl, Sand (originally known as Sandy, and partner of the original Sandman), and new incarnations of Mr. Terrific, The Star-Spangled Kid, Dr. Mid-Nite, Hourman, and The Black Canary.

The Justice Society maintains its headquarters just outside of Metropolis, in New York City. And Superman has teamed with several JSA members over his legendary career, in order to fight for truth, justice, and the American Way!!