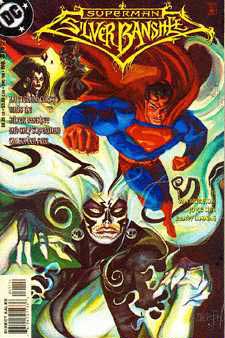 Siobhan (pronounced Shee-Vaughn) McDougal wanted to take her birthright as the firstborn of the clan, but was distracted by her brother Bevan, so that mystic forces banished her to a netherworld where a Crone made her the Silver Banshee. The Banshee was commanded to retrieve a magical book sold by her uncle before she could revenge herself on her brother and uncle. Superman encountered her in Metropolis searching for the book, and needed the Martian Manhunter's help to avoid being killed by her wail. A second time the Banshee appeared in Metropolis, leaving when Bevan appeared. After Batman found and gave the missing book to Superman, the Banshee - and her brother and uncle - was apparently destroyed by the Crone, when the Crone decided the family still suffered from pride. But Superman would encounter the Banshee again, when Blaze tried using the Banshee to kill Superman. Later the Banshee was used by another demon who was plotting to replace Blaze.

Later, the Banshee left her host for a young girl named Artemisia, who reeked havoc on Metropolis until Superman managed to subdue her with freeze breath. She is currently presumed incarcerated.