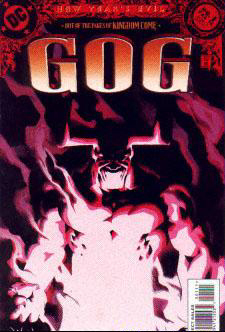 In the Kingdom Come story line, an atomic incident leveled much of Kansas and brought about the second coming of Superman. A boy called William survived the atomic disaster and was rescued by Superman. As he grew up, he came to believe he was chosen to survive the Kansas disaster to set up the Church of Superman with himself as the first apostle. But when Superman approached him, disapproving of his vocation, William was shattered and left without purpose.... until the mantle of Gog was bestowed upon him by a group of elder gods known as The Quintessence. The knowledge and power given to him drove Gog mad and he came to believe that Superman was to blame for the Kansas disaster, searched out Clark Kent and killed him! Not content with this murder, Gog set about traveling back in time, day by day, killing Superman again and again until he reached present day with the intension of accelerating the future catastrophe and promoting his illusion that Superman represents all that is evil on earth. His plan was ultimately thwarted in The Kingdom Saga (1999) and Gog was thought to reside in the custody of The Quintessence.

Gog reappeared to do battle with Superman, attacking him with liquid Kryptonite that made Superman age prematurely. In a climactic battle with hundreds of Gogs from across time, Superman was apparently slain. However Gog had taken Superman hostage using Kryptonite. Over the centuries Gog tortured and taunted Superman, but the Man of Steel never gave in, and Gog's life lost focus, until Superman convinced him to mend his ways.

He fought himself back in present time and stopped himself, and then faded away, leaving only one Gog behind, a malevolent Gog, presumably in custody.