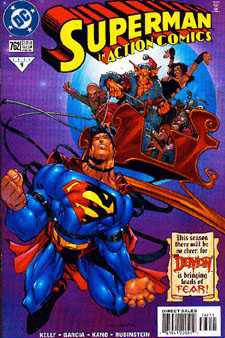 This femme fatal seems to enjoy keeping Superman guessing. Encantadora made a big entrance into crime fencing Kryptonite. Although it looked like the real thing when her many patrons made their purchases, when they sought Superman to test it, all they had bought themselves was a nice cozy prison cell.

Encantadora didn't get the result she wanted in Metropolis, so she contacted Ivan Blackwell in Japan. Blackwell made the presentation of the kryptonite at a conference on his estate. Meanwhile backstage Encantadora watched everything, waiting for Superman to show. Plans are interrupted as one of her previous customers busts in to retrieve 'his' kryptonite. In the scuffle Encantadora grabs the rock and makes her appearance known to the Man of Steel.

Confident in his perceptions that what she is holding is a harmless piece of rock, Superman still succumbs to the Kryptonite. Then, as quick as she made her entrance, Encantadora is gone, leaving a troubled Superman traversing the world trying to keep up with this mysterious woman. After speaking to Ra's Al Ghul in the desert of Africa, Superman hatches a plan to confront her.

Finally realizing that the strange 'mist' that surrounds her alters his perceptions, taking advantage of his fears, he aims to take it out first. Confronted seemingly by all of the patrons she cheated out of millions, Encantadora panics, and tries to play her wildcard. Superman is faster and takes the necklace containing the mist, and Encantadora into custody. Of course, she had offered earlier to give Superman her kryptonite for a single kiss and before he could utter a word, she took the payment in full.

Not long after we find Encantadora free once again and out doing her shopping for Christmas (ACT #762). There we run into The Demon, Etrigan. Etrigan, on a mission to find the true meaning of Christmas, encounters our lovely Latina and sees through her tricks for what they truly are, The Mist of Ibella. Encantadora seems surprised by this, revealing the fact that she might just not realize how her power over the mist actually works. Through the ensuing scuffle, Etrigan renders Encantadora and any Metropolis citizen nearby helpless to confront their inner demons. The mist brings what's inside on the outside, in Encantadora's case, she resembles a 'Nina Fantasma' (ghost girl, translated from Spanish). To end the Demon's rampage, Superman empties the cauldron of the mist by sucking all of it inside himself. His true self emerges and shatters Etrigan's spell.

Encantadora, a little chilly without the warm caress of her mist, is comforted by Superman and given his cape. But mysteriously, she uses her mist to disappear once more. She reappears in what seems to be her home, and gives the cape to her younger brother as a Christmas present. Etrigan watches from the background, knowing that she will be torn in her chosen role in upcoming events.

The events got into full swing after Superman began to succumb to Kryptonite poisoning. Little by little, cells in his body were ruthlessly attacked by a tiny nanobot that had been purposely implanted by Encantadora and her benefactor. Uncomfortable with the deed that she performed, Encantadora came clean with Lois Lane only to be pursued by Deathstroke, the Terminator. Deathstroke fails in his attempt as Team Superman emerge successful from their journey inside Superman.

Encantadora dropped out of site for awhile until pressed into service with Ra's Al Ghul. Ra's reasoned that she should be in his debt for not killing her the instant he laid eyes on her during her fake kryptonite fiasco. He also took her brother captive, telling her that the League of Assassins would kill him if things did not go as he determined. He forced her to use her Mist of Ibella to power the ultimate Lazarus pit, a crucible where he would enter a man and emerge a god. Superman and Ra's daughter, Talia foiled the plans. This was largely due to Superman's lie to Dora that Ra's had already killed her brother. Soon after she is reunited with him and then Superman takes her to the proper authorities. As he flies off the Mist of Ibella flask vanishes from his hand and he sighs wishing Encantadora luck in her quest for a better life for her and her beloved brother. "You have your second chance Lourdes, don't mess up." (ACT #772 & #773)