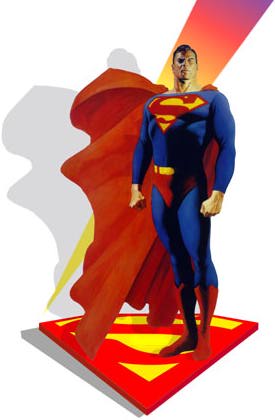 The world's greatest superhero. Superman's first public appearance in Metropolis was to save an experimental space plane. The "flying man" soon reappeared in Metropolis in a bright red and blue costume. He caused a sensation, and the press took to calling him "Superman". The first full length story on Superman appeared in the Daily Planet, and was written by Clark Kent.

Superman began his career in Metropolis, and quickly reassured puzzled police. During his early adventures, Superman discovered his vulnerability to magic and Kryptonite. After causing the arrest of Lex Luthor, (MOS miniseries #4), Superman found Luthor to be a constant threat. Soon after Superman's debut, criminal groups like Intergang and superpowered villains like Metallo soon began to appear. The Special Crimes Unit was created to deal with these extraordinary threats, and Superman works closely with them. He is a duly deputized special operative of the Metropolis police force.

The public soon learned that Superman was an alien (SUP #1), but Metropolis learned to trust him, especially as he made it clear that he was raised on Earth, and considered himself an American. Superman's DNA is incompatible with humans; he will be unable to father children on an Earth woman. Luthor, himself the proud father of a baby girl, is not above cruelly reminding Superman of that fact. Superman, could, in fact, mate with Maxima, but he has rejected her, and is, in fact, resigned to being the "Last Son of Krypton."

In spite of his obvious power, Superman is trusted by the people of Earth. Part of that is due to his overwhelming desire to help, part due to the fact that he has sworn never to kill. He has, in fact, killed however. With the help of Supergirl, Superman went to a "pocket universe" which had an Earth that had been destroyed by three super-powered villains. Superman executed all three of them (SUP #221-22; AOS #444). The stress and the guilt from this action caused him to develop a split personality, and for a time he acted as Gangbuster. Fearing that his emotional instability made him a danger to the people of Earth, Superman exiled himself into outer space, swearing never to take another life.

Superman's powers have undergone a number of changes during the years. Brainiac and others have managed to switch bodies with Superman. A satellite device controlled by Lex Luthor managed to make them go out of control, but Superman discovered that, and destroyed the satellite (SUP #10). Mr Mxyzptlk created Red Kryptonite, which made his powers go away completely. His powers have even increased until he couldn't control them, and were only returned to normal by a judicious use of the Parasite (AOS #511; 512). During the Final Night, Superman lost his powers completely. At one point Superman became an energy based being (SUP #123). As an energy being, he lost his ability to fly or physically touch objects. He used a new costume - a blue and white containment suit - to control his new powers. In an interesting development, when he was Clark Kent he was totally human. As an energy being he was later split in two, and for a while there were two Supermen - Superman Red and Superman Blue. Following his selfless sacrifice for the world during the Millennium Giants crisis, he become his old self again (Superman Forever).

Thanks to the plans of Dominus, Superman thought he needed to control the earth 24 hours a day, 7 days a week to ensure that people didn't destroy themselves, setting himself up as King of the World. However Superman soon discovered that Dominus was behind his misconceptions and soon defeated him. However Superman's reputation was tarnished and he had to work hard to re-earn people's trust.

Since then, Superman has regained his status of Earth's geatest super-hero, having helped defeat the many menaces that have come along... including the machinations of Brainiac 13 and Imperiex through the "Our Worlds At War" saga.

Superman lost his powers for a year after the conclusion of the Infinite Crisis, but regained them and continues to be Earth's greatest champion.

With the conclusion of Infinite Crisis, the DC Universe continuity was slightly reorganized and rewritten. Regarding Superman, there is evidence that the Man of Steel originally began his crime fighting career as a teenager.

Currently, Clark Kent and Lois Lane are married and live in a newly built (by Superman) apartment building on the Penthouse level. The penthouse has special communication/news screen windows that can become opaque for privacy and a fantastic "Boom Tube" type implant that allows for immediate travel to the Fortress of Solitude or JLA headquarters. For a time, a young boy Clark and Lois named Christopher Kent had lived with them in the Penthouse as their "son." In truth, Chris was the son of General Zod, who along with Chris, came from and evidently disappeared back into, the Phantom Zone. Fortunately though, because Chris, as Zod's biological son, was born inside a place in the Zone that acts as a normal world, Chris is immune to the 'ghosting' effects of the Phantom Zone, and is therefore somewhat free to live out his own life, trapped though he may be.

Now, working in the newly formed Justice League, with members that include Red Tornado, Red Arrow, Black Lightning, Vixen, Hawkgirl, the Green Lantern (Hal and/or John Stewart), the Flash (Wally West), Wonder Woman, Batman and new Chairperson Black Canary, Superman meets threats such as the new Injustice Society with his usual dedication in order to protect the people of Earth in the ongoing fight for justice. With the advent of the Final Crisis, through a Countdown of sorts, Superman's immediate future and past are not yet completely known, as worlds and multiverses are being changed and adapted continuously. One thing is certain however; Superman will always remain as champion of the oppressed and defender of the weak.

Superman's feats helped inspire a new generation of superheroes to appear following the discrediting of the previous generation's Justice Society. Some of the new generation banded together as the Justice League who Superman has often assisted, and ultimately joined. When Superman "died" fighting Doomsday, he was given a state funeral. A large memorial was placed at the site of his grave. Today, the statue remains as a symbol of his unquenchable spirit, and selfless heroics.

Known to only a few, Superman lives a double life as Clark Kent.