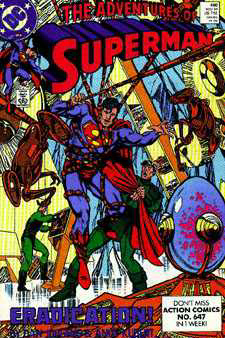 Created by a Kryptonian Relic called the Eradicator, the Fortress was a monument to Krypton on Earth. All of the items filling the Fortress were gathered from the otherworldly dimension known as the Phantom Zone (AOS #460). Artifacts present included various holographic imagery and histories of Krypton along with physical artifacts such as the Fortress Robots, Kryptonian Battlesuits, and the statue of Jor-El and Lara holding Krypton aloft in their hands.

The Eradicator's basic program (designed by an ancestor of Kal-El's named Kem-El) necessitated the change of Superman into the ideal Kryptonian and eventually to reform Earth into a physical duplicate of Krypton. Eventually overcoming the Eradicator and throwing the relic into the heart of Earth's sun, Superman kept tabs on this mysterious monument and used it as a convenient hideaway. The Eradicator once again used the Fortress when its energies physically reformed it into Kryptonian form. After the Man of Steel again resisted its attempts to overcome him, the Eradicator was destroyed, the energies being trapped by the very walls of the Fortress. When Doomsday killed Superman, the Fortress Robots began a program designed to collect his very essence and reunite him with his physical body. Whether or not it was connected to the Robots' efforts, the Eradicator once again gained Kryptonian form and replaced Superman for a time. The Fortress was destroyed when this reformed Eradicator drew all of the available energies out of the systems to reform his physical body after nearly being destroyed by the Cyborg, Hank Henshaw, at Coast City (SUP #117). Later, Professor Hamilton and Superman returned to the Fortress to find that the Robots had rebuilt the earlier damage completely.

The Fortress was dramatically redesigned by Superman when Dominus took mental control over him. He added many structural changes which resulted in the Fortress being visible above ground and detectable by the whole world for the first time. This was all done to help the media proclaimed King of the World keep an eye on everything and coordinated the efforts of his Superman Robots across the globe. They were designed and built to keep the peace when he realized he could not be everywhere at once. Lex Luthor, determined more than ever to rid the world of Superman as he continued to impose his will everywhere, entered orbit around the Earth with the teen hero from the Supermen of America, Outburst. There they located the top floors of LexTower, deposited there by Superman himself, and sent them crashing down on the Fortress, annihilating it completely (AOS #567).

After Lois was seemingly abducted by a Superman Robot designed specifically with her care in mind during the period of Dominus' mental attacks, Superman returned to the ruins of the Fortress. There he located Kelex's head and effected repairs allowing him to converse with his robotic friend. Shortly thereafter, they were both sent to a trace singularity containing a spectral image of the Fortress of Solitude complete in every detail. Using Kelex he was able to link with the Ghost Fortress in hope of keeping the trace singularity intact for future consideration.

Thoughts returned Superman to the Fortress shortly after the upgrade of Metropolis. With the help of Dr. John Henry Irons, Superman ferried one of Iron's creations to the former site of the Fortress. The device, called the Spectral Nexus Apparatus, was designed to capture the Trace Singularity where the Ghost Fortress existed. Once successful, Specnap was returned to Metropolis where they transferred the Trace Singularity to the newly discovered tesseract in Steelworks using an inter-dimensional portal and mass amounts of raw material to recreate the Fortress as it has never been seen before. The tesseract in essence is infinite space within a finite dimensional containment first encountered by Superman in his visit to the future (DC One Million). 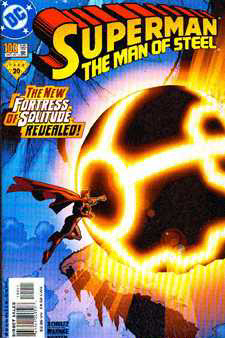 Dr. Irons, realizing that the upgraded Metropolis was under total control by LexCorp, designed a program to allow the hybridization of Kryptonian and Earthly technologies to keep Luthor at bay. When the Fortress began to reform, the two technologies were combined to allow the Earthly to modify and indoctrinate the Kryptonian to further confuse any potential digital invaders (Referring to the reborn Eradicator Program and the BRAINIAC 13 Virus). The newly designed Fortress boasts redesigns to the service robots as well as giving access to things once only contemplated, namely a solution-activated portal to the Phantom Zone. This doorway was activated during the rebirth of the Fortress by the interference of Luna and the CyberMoths releasing the Cyborg to attack Superman. The Cyborg, eventually brought under control by the citizens of Kandor (also residents of the Phantom Zone) was returned to that far off plane of existence. Luna, coming too close to this dimensional opening, was pulled in and lost for the time being (This brings together an interesting hypothesis, in Superman: King of the World, Dominus was sent to the Phantom Zone, does Superman dare traverse this dimensional rift with so mortal an enemy present there?) Phase 2 of the rebirth of the Fortress also called for the same hybridization of Dr. Iron's Steelworks to assure wresting total control of it from LexCorp.

Now, high on a remote ledge in Andean ice fields, the lonely containment sphere awaits Superman's brute strength to allow access to the limitless space that lies within. With this elaborate locking mechanism, no one should be able to access the Fortress without Superman present. Now that Kryptonian science has been enhanced by John Henry Iron's hybridization program for Earthly technology, the Fortress' giant energy crystals deliver enough power to shake the heavens. With the option of endless spacial growth, the Man of Steel will never want for room to house his constantly growing collection of alien culture, Terran artifacts, and intergalactic memorabilia. The infrastructure complexities of the Fortress are maintained by a fleet of robot drones, mutable and adaptable to any requirement and directed by the mighty Kryptonian computer programs which control the Fortress in Superman's absence. While this describes the Fortress as we presently know it, the recent additions, such as the aforementioned portal to the Phantom Zone, provide mysteries and wonder only experienced by Superman as he explores what his new home has to offer (Metropolis Secret Files #1).

Of late, the Fortress has been the site of many battles. Superman learned of an alternate Krypton when battling Brainiac through the Phantom Zone. He also found himself trapped in Kandor, the bottle city he stores in the Fortress. He did battle with the Crime Syndicate over the "super baby", and he fought with Wonder Woman a year in the future over the "vanishing".

The arctic Fortress was destroyed in a battle between Superman and Wonder Woman (SUP #211) and later Superman rebuilt himself a new Fortress of Solitude in the Amazon jungle (SUP #215).