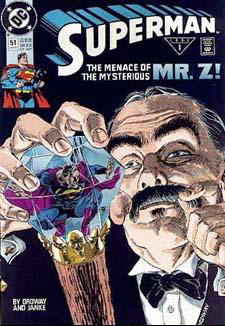 This mysterious immortal tried to add Superman to a collection of souls trapped within a gemstone, but Superman's strong will and alien body enabled him to escape and free the gem's other souls. Following this encounter, when Superman was sent through time by a Linear Man, he encountered Mr. Z acting as a WWII German officer. The remains of his gemstone are presumed destroyed within Superman's Fortress and Mr. Z was left suffering from amnesia on a south pacific island, after trying to stop Superman. Other than he can return to life after being killed, and can mesmerize people, not much else is known about this figure.