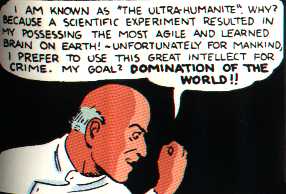 One of the world's greatest criminal masterminds, the Ultra-Humanite has fought several heroes over the past century, and is noted for being one of Superman's first major opponents.

While no one knows his true identity, the Ultra-Humanite was originally a bald, wheelchair-bound scientist, who possessed extraordinary psychic powers. He used his extreme psychic abilities to launch an effort to rule the world, and in doing so, came into conflict with several mystery men.

At some point, the Ultra-Humanite transferred his brain into the body of actress Dolores Winters. In this form, he fought The Justice Society of America repeatedly, as well as its larger affiliate organization, The All-Star Squadron.

For the most part, Ultra laid low throughout the latter half of the 20th Century, but then reemerged as a leader of The Secret Society of Super-Villains. This time, his brain was encased in the body of a genetically enhanced albino gorilla. And although his Secret Society was defeated by the combined effort of The Justice League and The Justice Society, Ultra later launched an attack on Infinity Incorporated, a latter-day incarnation of the JSA, comprised of the adult children and proteges of the original JSA team.

Recently, The Ultra-Humanite joined The Council, a secret subversive organization which has a history of manipulating genetics to suit its needs. Under the guidance of Dr. Anatol Mykros, The Council has used clones of The Sportsmaster, a major super villain, for its henchmen. When members of the JSA tracked down Ultra-Humanite to an Austrian lair, they were surprised to find the massive body he was more recently housed in...without its brain.

Now there is an alert to all law authorities, as no one knows what identity The Ultra-Humanite has currently assumed...or what no plot this mastermind of men has concocted to rule the world.

One question remains about the major conflicts between Superman and The Ultra-Humanite. It is documented that The Man of Steel battled Ultra while the latter was in the form of Dolores Winters, as she appeared during the 1940s. Perhaps The Ultra-Humanite managed to travel through time, from the 1940s, and battle Superman in the modern era. However, the details of this incongruity have yet to be revealed. Nevertheless, Superman stands as one of The Ultra-Humanite's most powerful enemies, alongside The Justice Society of America.