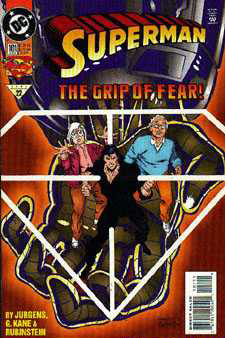 The Kents were both born and grew up in Smallville, Kansas. Pa Kent's family owned a farm, while Ma Kent's family ran a general store where they first met. After high school, Jonathan enlisted in the army, and fought overseas, where he was captured and believed by people to be dead. But he eventually returned to Smallville, married Martha, and took charge of his family's farm. They hoped to have children, but were unable. Then one day before a winter storm, they found a crashed rocketship that held a baby. They decided to adopt the baby and in the Spring told neighbors that Martha had given birth to the child and named him Clark Kent. As Clark's powers developed the Kents taught him how to use them wisely and the responsibility they held. When Clark decided he needed a public identity to use his powers, the Kents helped develop Clark's dual identity. Martha designed Clark's Superman costume, while Jonathan invented the Superman "S" symbol. Over the years, Ma and Pa Kent have provided much wisdom and support to Clark Kent.

When Superman returned from the 'pocket' universe with Matrix (see Supergirl), the Kents treated her as if she was their daughter.

When Lois Lane visited Smallville and thought Superman might be Clark Kent, Jonathan explained that the Kents raised Superman as a step-brother to Clark.

After Superman appeared to die after fighting Doomsday, Jonathan had a heart attack and in a near death experience helped Superman's spirit return from another place.

When Conduit learned Clark Kent was Superman, he tried to kill the Kents, and had their farmhouse destroyed so the Kents spent some time traveling the United States in a RV. However after a while, the Kents returned to Smallville where they had a new home built.

In "Our Worlds At War", Imperiex destroyed Topeka, and in the process decimated the Kent farm. Superman used his rage at their seeming demise to put an end to the threat, and later the Kents were found in hiding. Pa Kent had a mental amnesia, which was later revealed to be part of Manchester Black's machinations.

The Kents recently purchased the General Store in Smallville and gave up farming. Also, of late, Clark visited with the Kents only to do battle with Repo Man. The Kents serve as a buffer between Lois and Lana, who appears to be having trouble resolving her issues with Clark.

Alive and strong, the Kents are Superman and Clark Kent's moral compass.