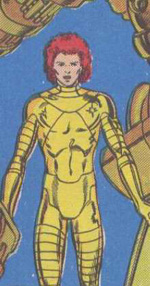 Alexander Luthor was originally the sole survivor of Earth-3, which was in a dimension in which Lex Luthor was the only super-hero on his planet, and constantly save humanity from the Crime Syndicate - an evil reflection of Earth-1's Justice League of America. Earth-3 and its dimension was one of the first realms wiped out by the Anti-Monitor's antimatter wave. When Luthor got wind of the Anti-Monitor's intentions, he took his son (whose mother is Lois Lane) and rocketed him throughout the dimensional barrier. A quirk in the space/time continuum saw a teenage genius emerge. The young Alexander Luthor was a key ally to the Monitor, Harbinger, and the scores of heroes who united to defeat the Anti-Monitor and his Shadow Demons.

At the conclusion of the original Crisis on Infinite Earths, it seemed as if Alexander Luthor possessed the ability to harness cosmic energy. He became the human vessel into a pocket dimension. He took in Earth-2's Superman and Lois Lane, and Earth-Prime's Superboy, all of whom were left refugees when their realities were obliterated. For several moons, Alexander and his "family" seemingly resided in a comfortable limbo. But with new rifts in reality, and a growing tide of untold evil and darkness rising, Luthor and his friends have apparently made their presences known during the early days of the Infinite Crisis.