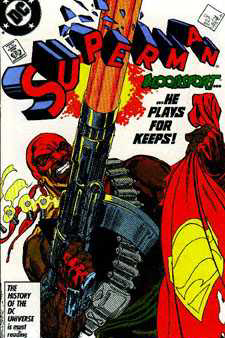 The first Bloodsport (Robert DuBois) had a mental breakdown and became obsessed about the Vietnam war, after learning that his brother had gone to fight in his place and become a quadruple amputee. An agent of Lex Luthor persuaded DuBois that Superman was the enemy and supplied DuBois with a teleporter and weapons including bullets made from kryptonite. DuBois rampaged through Metropolis as Bloodsport, and injured Superman with the kryptonite bullets before collapsing when confronted by his brother. 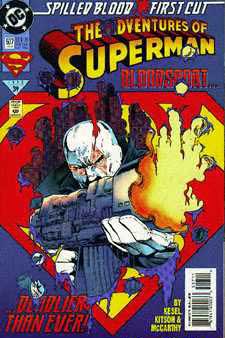 A second individual, Alex Trent, adopted the name Bloodsport and used high tech weapons provided by Bloodthirst to further his racist agenda and attack ethnic minorities. Eventually both Bloodsports dueled each other in a prison battle monitored by Superman. Trent used the duel to stage an escape attempt, and DuBois was shot to death by guards when also trying to escape. Superman captured Trent. Superman also encountered a masked woman, calling herself Demolitia, using teleport abilities similar to Trent's. Unlike Trent, she used her powers as a vigilante crimefighter.