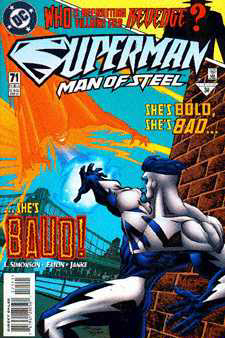 An energy being, she is able to disrupt magnetic fields and phase through objects. She worked for "Mainframe" who used her to spy on Metropolis' criminals. She was recruited into the second Superman Revenge Squad (MOS #71), although she ran away when it became obvious that Superman would defeat them.