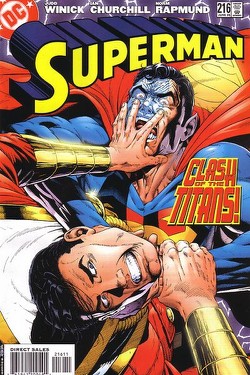 Historically, the mega mastermind called Eclipso is the alter ego of Dr.Bruce Gordon, a benevolent scientist and inventor whose ultimate endeavor was the creation of Solar City - a fully functioning urban center powered completely by solar energy. As the story goes, Dr. Gordon was in the South Pacific to film a solar eclipse, when a local shaman named Mophir tried to murder him for defying local customs. Using a strange black diamond as one of his weapons, Mophir cut Gordon, before he fell to his own death over a cliff. The islanders - hearing of Mophir's demise - were grateful to Dr. Gordon, and gave him the mysterious black diamond and Mophir's purple and black costume.

When Dr. Gordon was on hand for a subsequent solar eclipse, he was immediately transformed into the malicious, deviant entity: Eclipso! A super-powered and fierce fighter, and possessing true superhuman powers, Eclipso single-handedly decimated Solar City. From this point onward, Dr. Gordon's life was forever a constant battle to suppress his evil alter ego. Eclipso would attack civilization in varied strikes. He proved himself a master of chaos and pure evil. His earliest super-heroic opponent was Prince Ra-Man the Mind-Master, who successfully used his mystical powers to protect citizens from the Dark Master's harm. The Batman was the next major hero to battle Eclipso.

For an extended period, it appeared as if Dr. Bruce Gordon was able to repel his inner evil. He successfully gained employ at Ferris Aircraft, and pioneered the utilization of solar-powered aircraft. But his harmony wouldn't last, as Eclipso reemerged. The evildoer waged a protracted battle with Green Lantern. The two opponents became natural enemies, as Eclipso's dark powers contrasted with the light energy of the Emerald Gladiator. When the Crisis on Infinite Earths occurred, Eclipso was unleashed - joining several super-villains in their assault on the cosmic champions. Eclipso could be seen fighting Wonder Woman and The Metal Men.

His next major assault on humanity took place when Eclipso emerged as the shadow champion. He had suddenly become a shadowlord of sorts, and enhanced his abilities. Eclipso apparently murdered several super-heroes, and engaged The Spectre in titanic battle. Before recently attacking Superman and Captain Marvel, Eclipso's powers were apparent when Mordru and Obsidian tried to eliminate the Justice Society of America. Eclipso is one of DC Comics' deadliest super-villains, and his malicious streak seemingly has no end in sight.

Eclipso's greatest powers are derived from his mysterious and mystical black gem. When Dr. Gordon is transformed into Eclipso, the left side of his face is discolored and resembles a bluish tone, as if his visage was eclipsed. When Eclipso holds the black gem to this "eclipsed eye", if fires off a cold beam of black light. Whenever Eclipso holds the beam over his uneclipsed eye, it fires a laser light of destruction.

In the most recent chronicles, Eclipso has attained the ability to manipulate shadows and the dark energies within our environments. He is also able to overwhelm people and bring them under his spell. Whenever his victims are possessed, their faces bare the similar "eclipsed" visage Eclipso himself wears.