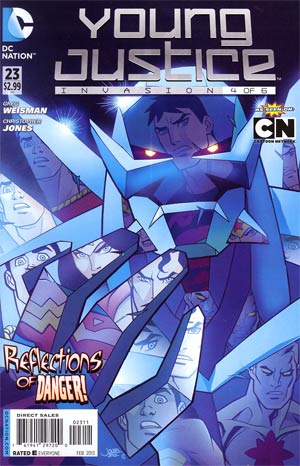 Click to enlarge
Whilst all the action goes on we flash back five years and Dick Grayson's birthday party at Wayne Manor. Bruce arrives putting a smile on his ward's face. For once the Dark Knight gave up crime fighting to be with him. Giving up a critical mission in Dhabar for pizza, jell-o and ice cream is a big deal.

Bruce smiles that the Dhabar mission is being dealt with and we join Clark Kent, Jimmy Olsen, M'Gann and Superboy who are all watching the press conference with Quraci President, Rumaan Harjavati. The covert mission for them is to stop a plot by Queen Bee to assassinate the President.

M'Gann contacts Clark Kent via mind-link and reveals she knows he is Superman. She reassures him that his secret is safe and that the family resemblance escapes Superboy himself because he refuses to look at his own reflection. She goes on to berate Superman's treatment of Superboy. For the first time, Superman opens up that he is desperate to know Superboy as a person, not just as his genetic clone.

M'Gann begins to understand Clark's inner turmoil and as the speech from the President gets underway, she guesses that the assassination plot has been abandoned by Queen Bee. Amongst all the personal drama they are swamped in they are distracted and don't notice hitman for hire, Deadshot, taking aim from a nearby building...

Back to the present and Red Tornado relays the current events to remaining core Justice Leaguers, Batman, Aquaman, Green Arrow and Black Canary.

Plastic Man watches from the outside while a force field bubble has encapsulated the city of Metropolis. Bee and Beast Boy watch over Noor Harjavati to prevent a repeat assassination. Black Lightning is investigating the force field generator that drilled to the core of the city. The rest of Beta Squad - Flash, Martian Manhunter, Atom, Nightwing, Wonder Girl and newcomer, Blue Beetle are launching an investigation on the Brainiac Ship hovering above.

Batman and Robin are carrying out an investigation in Gotham City and Robin questions why they are continuing while the League are struggling. Batman reassures him that his colleagues are more than capable of dealing with everything.

Almost on cue while Batgirl and Plastic Man are communicating either side of the bubble, Batgirl is attacked by Superboy's corrupted clone, Match.

On Kylstar's ship, the kidnapped heroes have escaped their prison and from a window ask Kylstar himself (via a translation droid orb) to return them to Earth. Their captor stands on the outer hull of his crystal ship. Listening to their request, Kylstar instead orders his sentient weapons to return to the Weapon's Room. Seeing their request as futile the team, who realize they can't escape to the outside given their deep space predicament, turn to escaping into the ship hoping to draw Kylstar inside. Kylstar does follow, shrinking down to their size and teleporting inside the ship, but he is a formidable foe and is quickly engaged in combat with the heroes.

Meanwhile J'onn, Atom and Flash are able to phase into the ship and confront the mysterious Brainiac that has captured Metropolis. Brainiac is revealed to be a collector of planetary information and a droid. However he is a supercomputer that is able to out think Atom, out maneuver Flash and counter Martian Manhunter.

Outside Kylstar's ship, M'Gann and Lagoon Boy are stealthily giving chase aboard her Bio Ship. They share a tender moment where M'Gann reveals her true form to her friend. Despite their socially unacceptable appearance they find they are more than compatible but as they move to embrace one another, the ship alerts them that they are now just outside Kylstar's vessel. Inside the ship Kylstar is distracted by the fight and doesn't detect the presence of the Bio Ship, his beating of all but Superboy is keeping him busy.

In Metropolis, Black Lightning requests the help of Beast Boy, Batgirl and Bee to destroy the probe from inside the impact crater. Batgirl is busy with Match and though they are uneasy abandoning Noor in the protective custody of her bodyguards and Bibbo Bibowski in his bar, Bee and Beast Boy abandon their bodyguard posts to assist the more pressing mission.

Brainiac tires of his intruding foes and after besting them he drops them out of the air lock into the atmosphere. Nightwing, Blue Beetle and Wonder Girl are able to phase inside Brainiac's ship undetected ready for a surprise assault, thanks to the distraction provided by Flash, Martian Manhunter and Atom.

Nightwing tries to radio in to the three heroes unaware that they are hurtling head first for a deadly collision with the force bubble over Metropolis!

Story - 5: As the storyline continues, more and more depth develops and along with some fantastic characterizations we are given some great action too. I am enjoying the book's approach to the reader and not making it babyish. With no newer episodes to enjoy on television I'm happy to enjoy the book in the mean time. This storyline is shaping up to be one fantastic epic.

Art - 4: The more action there is, the more Christopher Jones seems in his element. You can really see that Jones is enjoying the action/adventure amping up.

Cover Art - 4: Far too similar to last issue's cover but because this is far better realized I find myself more inclined to favor this art. The two leagues genuinely seem to be in danger.