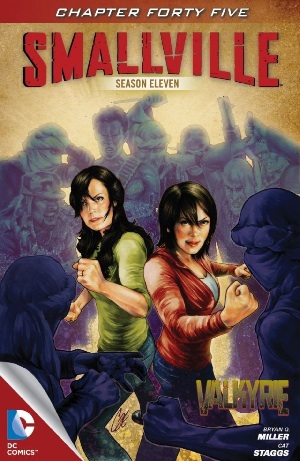 Click to enlarge
Starting back up where the last chapter of this story left off, Lana Lang deflects a bunch of bullets shot at her by child soldiers. She stops the bullets and tells them that they don't have to live the way they are living and don't have to be soldiers. She then proceeds to take them to her Sanctuary as Lois Lane follows, trying to get her story.

That night, Lana explains to Lois that with the powers she has and with what happened in Metropolis, she had to go somewhere where she could make a difference. She tries and tries to stop the bloodshed and sex trade, but she cannot stop it completely. Even with her contact, David, she doesn't always succeed. Lana explains that the reason she brings the kids to the Sanctuary is because she wants them to have a childhood, something she herself didn't fully have in Smallville.

In Tinasha, a bunch of the warlords are meeting together to discuss destroying the Angel of the Plateau. After a brief fight and the murder of one of the warlords, one of them brings up an easier solution. In order to destroy a threat from the west, pit it up against another from the west. In this case, they have hired a mercenary that has a connection to Lana, a mercenary named John Corben aka Metallo.

Story - 3: I will say, I liked this chapter much better than the last, but "Valkyrie" is just not clicking with me the way "Effigy" did. Maybe it's because I don't care about Lana Lang pretty much at all, but this story just doesn't really intrigue me all that much.

This is not to say that this wasn't a good chapter/issue of Smallville, and actually I'm glad this story IS continuing next Friday as well, because I'm looking forward to seeing where this is headed based off of Metallo showing up at the end.

Smallville's version of John Corben aka Metallo has always been a good take on the character. From his first appearance in "Savior" to his villainous role in both "Metallo" and "Upgrade" (an episode that I actually enjoyed believe it or not), even to his cameo in "Prophecy," I have always thought that this was the best take on the character in any form of media from comics to animation to live action television. I think we can also assume from the shot/panel of Metallo in the door-way that his Kryptonite heart is able to absorb Kryptonite as well as emit it. But from what we know of Lana's power as well, she can do the same. I am hoping that Metallo will absorb the Kryptonite and (hopefully) powers out of Lana's body so that she can fulfill her own destiny instead of trying to be like Clark, but I predict that Lana will be the one to absorb Metallo's Kryptonite, shutting him down for the time being.

Like I said above, it's good to see Smallville's Metallo once again and I'm really hoping that he will become a recurring character in Season 11, because he really is that good. I'm looking forward to his interaction with Lois a lot. Wondering if he will still be attracted to her or if he will be angry at her for clearly choosing Superman over him. Only time will tell, but this is another reason why I'm happy that we get another "Valkyrie" this coming Friday. Plus it gives Mr. Marc Pritchard a break, and I'm sure he appreciates that.

I'm also wondering if we are going to get the backstory on why Corben switched from being "good" at the end of "Upgrade" to "bad" by "Prophecy". I hope we do, because otherwise it still doesn't make sense.

Finally, I liked Lois Lane a lot better in this issue. I am so glad that she is "back to normal" as opposed to what we saw in "Valkyrie" - Part 1, as that was NOT the Lois that I know and love. Or, at least not completely.

Ultimately, this was a decent chapter of Smallville that left me wanting more, even though I'm not all that invested in this story, the inclusion of John Corben gets me excited to see where it goes. Thanks guys, see you next week!

Art - 5: Ever since I saw the first digital cover for Smallville: Season 11, a cover which my friend Andy Behbakht has as a mural on his wall, I fell in love with the way Cat Staggs makes the Smallville characters actually look like their television counterparts. She does it again here with Lana and Lois, and her panel of John Corben was stunning. Again, he is one of my favorite Superman villains so that may be why, but he's still looking good in this chapter.