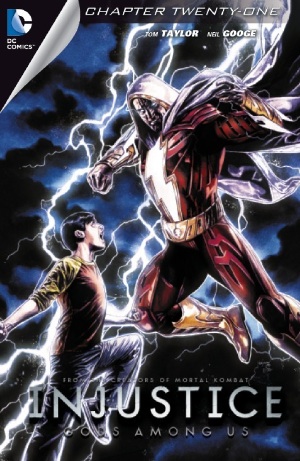 Injustice: Gods Among Us - Chapter #21

"Injustice: Gods Among Us" - Chapter Twenty One

Click to enlarge
Hawkgirl is on patrol and has just taken hold of a perpetrator. Unbeknownst to her, she's being monitored by Batman and Catwoman. She's quickly apprehended and dispatched through the combined efforts of Captain Atom, Black Lightning, and the Huntress.

The story then cuts to Wonder Woman hovering over refugee camps in Mogadishu. She laments their situation, and when a soldier attempts to commit rape, she goes into action, demanding that all of the soldiers present themselves. She chastises the soldiers and tells the woman that was almost raped, that the man will never harm her again. When the woman counters that another man will just replace him, Wonder Woman agrees and cracks the rapist's head open. She then orders the soldiers to drop their weapons, and tells the women to pick them up. When asked "what happens now?", Wonder Woman replies "Whatever happens is up to you," then flies away as the women mow down the soldiers with their newly gained arms.

When Wonder Woman arrives at the Watchtower, she's informed of Hawkgirl's abduction. Luthor correctly surmises that Batman is behind it, and thinks he knows a way to augment the League's numbers to address the issue. When the scene cuts to Batman, he assures Catwoman that he only needs Hawkgirl to be locked up for one week. When Catwoman insists that the League will look everywhere for Hawkgirl, Batman counters that they won't even know that she's missing. As he says this, we see Hawkgirl arrive at the Watchtower, to the surprise of everyone there.

Story - 2: Injustice: Gods Among Us isn't a very well written story. It's had some moments that have been better than others, but overall it's been lacking all of the elements of literature that govern most stories. This issue calls to mind the need for quality characterization. Since Taylor hasn't defined his characters well at all, he leaves the reader to go with what has been generally established about the hero or heroine in question. For instance, if you haven't read comics with Hawkgirl, you still probably have some understanding of her character and she' s an excellent combatant. Her take down is done so effortlessly, like a Romper Room sing-a-long, you have to wonder if there shouldn't have been a wee more to it. It could just be accepted or explained away as fans do often for underdeveloped stories, but means the writer hasn't performed his duty well at all. The lack of characterisation is compounded when the story shifts to Wonder Woman.

Readers were given ephemeral filigree of an explanation for Superman murdering the Joker. Wonder Woman not only murders a man in cold blood, she enables more of the same by arming the refugee women and leaving them to their devices. Again, Taylor hasn't developed Wonder Woman's character, leaving the reader to go on his own, with only the general impression of the character. Due to this fact, Wonder Woman's actions are barbaric to say the least. What is worse, if we judge by the action of the scene, Wonder Woman's anger was due to the women being victimised by the soldiers. She seeks equity by making the soldiers victims, but the women, victims as they may be, are still alive. The men deserve death, because that is what these psuedo-feminist situations usually turn into, a thinly shrouded attack on men in general. Surely, there could have been men who were raped or victims as well, but because it's Wonder Woman on the scene, the victims must be women and the guilty parties must be men. Wonder Woman's portrayal shows her as an unbalanced brute, but we have no idea as to why or what for. All that we're left with is the shock value of seeing Wonder Woman murder someone, as Taylor leaves us with only a dominant impression to evaluate her.

Cover Art - 3: It was apropos when Captain Marvel was the story's focus, but unless he's going to featured more prominently, it's time for a change.