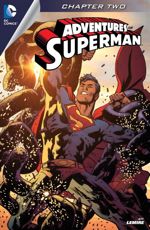 Click to enlarge
It's a crisp day, painted with clear skies and an effervescent sun. On days like these, a tiny shack and the custodial trees within which it is nestled are an entire world to a boy. There's little need for anything else.

Two young boys make the best of their time and indeed their youth by playing 'superhero'. Last one to the fort is the bad guy - and maybe a dirty, rotten egg. First one to the fort is the good guy, the hero. And just which hero would a little boy want to be? Batman? C'mon, stink butt, Batman's a hoser. Why pretend to swing on a cable when you could pretend to fly? No, it's not the Dark Knight our little boy in yellow wants to be. It's Superman. His buddy, though - the dirty, rotten egg - can't quite decide which bad guy he wants to be. Brainiac is pretty cool, but so am Bizarro. Parasite? Nah, that dude can't fly. Zod! Yeah, yeah, yeah be Zod! Or maybe Mxlyer... Myxnstur... you know, the little guy.

All that play fighting makes a growing boy pretty hungry, and what's cooler than left over pizza? Yeah. Nothing. So, our two little superheroes kick stones on their way back to the farmhouse, making grand plans for the next bout of 'superheroes.' It seems it's indisputable: no matter who plays the bad guy, and no matter which bad guy he plays, the kid playing Superman will always win. Because Superman always wins. You don't need the wisdom of a ten year old to know that.

Story - 5: Jeff Lemire is one of those writers who understands the elemental function of characters. Lemire is a great writer, but he's only at his best when he's focusing on the players. If you've read Lemire's seminal works, like Lost Dogs or the more recent Underwater Welder, you'll be familiar with what I'm talking about. Even his on-going run on Animal Man, a more action oriented title, displays the kind of presence and depth Lemire is able to imbue in his characters. This little Superman tale follows suit. "Fortress" is bursting with the callow charm and puerile freedom of boyhood. It feels genuine, full of skinned-knees, comic books, best pals, and make-believe - the essence of adolescence. Change the setting to the North Atlantic coast and add in a dog, and Lemire pretty much wrote my childhood biography.

There's also a hint of Canadiana in this story; you can almost smell the maples. No doubt Lemire, a Canuck himself, intended to inject into the story some of his own boyhood growing up in Essex, Ontario.

I'm curious, though, just how well received this story will be. It isn't a "real" Superman story, although Big Blue does "appear" at the end. One of the more insipid comments I read concerning Adventures of Superman #1 yawped sarcastically, "DC is actually publishing real Superman stories?!" This was an obvious jab at the New 52, which is all well and good, but I wonder how that commenter is going to re-act AOS #2. I can understand, I suppose, why some readers may be put off by "Fortress," but ultimately this title is opening fertile ground for writers to explore. Superman and comic books in general are enlivened by alternative ideas and stories. "Fortress" isn't so much a Superman story as it is a Superman fan story, and I hope more tales like it - that is, not your every Wednesday affair - are on the slate.

Art - 5: Lemire's art is roughhewn and grotesque, and it looks wonderful. There's something inviting about ugly beauty (just ask Thelonious Monk), and while I never thought I'd see Lemire's vision of Superman, I'm truly glad I now have. His art compliments his indie titles, like Sweet Tooth, and I was a bit unsure how well his pencils would translate to superheroes. I was shown just how well indeed when he drew "The Butler Did It," the excellent first issue of Legends of the Dark Knight. I certainly wouldn't have a problem with seeing Lemire more often on art duties outside of his own creations.

The rest of the art team did a bang up job, as well. Villarrubia's water colors are especially endearing and suit Lemire's art style.