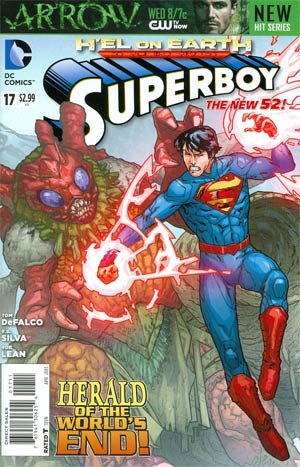 Click to enlarge
NASA staff are running around in panic as solar flares increase to previously unheard of levels. The flares are so powerful they are burning out satellites orbiting the sun. They do know that something on Earth, at the North Pole is connected to it but are unsure whether it is the cause.

Batman, Superman, Wonder Woman, Superboy, a hologram of Dr. Veritas and Cyborg know for sure. They watch from outside the Fortress as the star chamber activated by H'el begins draining the sun of its power. Superboy quizzes the heroes and Superman angrily vows that they must destroy the chamber.

The Watchtower orbiting satellite contacts the heroes. The Flash, who disappeared after a conflict with H'el, radios in and requests that Batman and Cyborg help him coordinate rescue missions for the havoc being caused. They agree leaving just Superman, Wonder Woman and Superboy to save the world. Dr. Veritas bows out as the star chamber begins to disrupt her hologram tech and so this trio formulates a last ditch attempt to succeed.

Despite the odds, Superman remains calm and composed, a fact that Kon finds astounding. He was always reluctant to take part, to get involved and was generally out only for himself but Superboy, in the presence of two of the world's greatest champions, decides there and then that it is finally time to take a stand and be the hero Superman told him he could be.

High above them the star chamber is glowing and humming with more and more power. H'el and Supergirl have a heart to heart. H'el does his best to convince Kara that "the earth and its populace won't feel a thing", and despite his repeated play on words Supergirl still ignores her common sense and listens to this man who offers her everything she ever wanted.

She begins questioning the higher than expected solar readings but H'el brushes her off with talk of her being his inspiration and suchlike but something out of her line of sight catches H'el's attention and he teleports away. When he materializes it is to interrupt the attack plans of Superman. He flings both Clark and Diana into the air and attacks Kon. Despite repeated failures H'el can't understand why they keep trying to stop him and he takes it out on Superboy by dismantling the armor suit.

As Superboy begins unravelling he flails as he is teleported away and doesn't see Superman fighting for him. H'el electrocutes the Man of Steel and redresses him in his family armor so that he can die with minor dignity. With a second wind Wonder Woman returns ready for combat but Superman writhing in agony instructs her to help Superboy. Diana reluctant to flee from a fight, trusts Superman's judgement and tries to locate Kon.

Inside the Fortress, in a crater beneath the star chamber, which has risen out and above the Fortress, is Kon. He awakens and now in just his neonatal suit, Kon struggles to use his restored TTK to hold himself together and agonizingly tortures himself back into action. Kon tries to fly up to the star chamber so he can fulfill the mission.

As he floats slowly upwards desperately knitting himself together he is interrupted by The Herald. The strange creature has arrived to investigate the source of the world's end. The Herald explains he is there to witness a world with no hope but Superboy retaliates that the world DOES have hope... Superman, and attacks the strange creature with shards of ice.

The Herald is surprised by the attack and offers Superboy a glimpse of his possible future. Should he survive today, he could be a force to shape the destinies of untold worlds. With that fortune told the Herald disappears. As Superboy recovers his composure, small rifts and black holes begin appearing as the star chamber begins overloading, tearing open the time stream.

The Herald arrives at the edge of the universe to meet his master and admits he blew the horn (in Superman #1) to signal H'el's arrival, and the Earth's inevitable end. We cannot hear Oracle's voice but we do hear Herald also admit he has since detected five anomalies on Earth that could disrupt the cosmic balance.

At the same time Superboy is navigating through micro time storms to reach the star chamber. With his strength wavering, Kon is determined to reach his goal but his journey is interrupted again as Supergirl tries to stop him. Superboy tries to appeal to Supergirl, trying his best to make her see through H'el's machinations. Supergirl responds with excessive violence, Superboy endures blow after blow desperately holding his body together and imploring for Supergirl to listen.

Supergirl refuses to listen to a clone. Clones in the past had done terrible things, they were killers. Superboy rightly points out that he is not the same as the clones past and that if he was the killer she believed he was why was she the one delivering the savage beating? Kara grabs her opponent by the throat and orders Kon to walk away and allow H'el's harmless plan to follow through, or force her to kill him. Superboy valiantly refuses to back down and before Supergirl strikes her killing blow Wonder Woman swoops in and slams into Kara.

As the two females begin to beat each other to a pulp, a battered, bruised and bleeding Superboy crawls out of the icy rubble and spies his goal, the star chamber... Gathering the last of his strength Superboy vows to destroy the chamber or die trying!

To Be Continued in... Supergirl #17 followed by the finale in Superman #17.

Story - 4: Finally, finally, Kon begins to act like a hero. The kind of hero that fans had been asking for since the revamp. This issue was a really good romp that was characterized extremely well. The only thing that felt forced was the scene with the Herald and his glimpse into Superboy's future. Although it was good to see someone other than Superman offer Kon positive feedback AND have him listen. With all life on Earth at stake, not to mention all of time, it seemed bizarre that Batman, Cyborg and Flash would dash away when it seems like an 'all hands on deck' moment...

I'm keen to hear from the readers about the fight in this issue. Last chapter, Superboy blindsided Supergirl into the ice which instigated a violence against women debate. This issue it was turned around in a more brutal fashion, what are your thoughts folks?

Art - 3: The art was not up to its usual standard. Inks were reminiscent of Kenneth Rocafort and for what we've grown accustomed to it felt out of place. All said, self contained, the art is still pretty slick and action packed. It's just the signature style that seems to be changing in technique.

Cover Art - 3: The ingredients are there but nothing here really sits well. The Herald just looks goofy and Superboy is swinging a powerful slam punch, but the layering and perspective is off and so he doesn't even look like he is attacking Herald. If the blow had actually connected I'm sure it would have been a far more impressive offering.