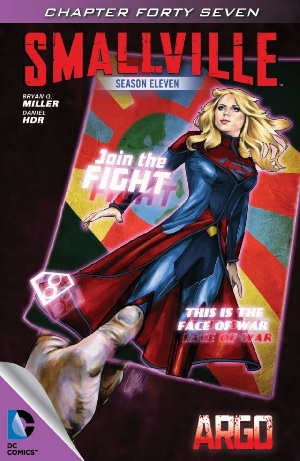 Click to enlarge
Clark and Kara, reunited in the 31st Century, embrace in space as they get caught up on developments since she disappeared from the 21st Century on Jor-El's orders mere days before the arrival of Darkseid and Clark's transformation into Superman. She tells of how she was welcomed into the Legion upon her arrival in the current time and of how the discovery of Argo gave her hope she might finally have found somewhere to fit in.

But then EarthGov sabotaged the Legion's diplomatic mission to Argo, precipitating war. Kara reveals that she wasn't a prisoner of EarthGov, after all, but a spy. And then she flies off.

On the EarthGov holding facility, Minister Niedrigh and the council debate their response to Superman's infiltration and abduction of Supergirl. The council is eager not to initiate a conflict with the Legion, which they fear would bring unwanted attention from the United Planets. More aliens telling them how to deal with other aliens, they fret, xenophobically. They tell the Minister to focus on intelligence gathering for the planned assault on New Krypton, and he assures them his agents are already in place.

The Legionnaires declare their innocence and try to assure Beh-Osk that they are there only to ensure peace, but Beh-Osk is not convinced and orders them brought "to the rings." Just then, Superman and Supergirl arrive, attesting to the truth of Cosmic Boy's defense.

And, much to Clark's surprise, kneel they do.

Story - 2: Anyone who has ever read a Grant Morrison comic knows that stories are sometimes hard to follow. Sometimes that's intentional (as with Morrison), and sometimes, whether intentional or not (i.e., whether it's a Morrison work or not), the extra effort pays off. Outside of comics, my favorite (sadly deceased) author is (was?) David Foster Wallace, who rose to prominence in the early 90s after the publication of his second novel, Infinite Jest, which, set mostly at a tennis academy and the halfway house down the hill sometime in the not-too-distant future, is as much about the value of work for its own sake as it is about anything. It's a crazy huge long book full of ridiculously long sentences and obscure or technical terms (luculus, for instance), and I have read it four or five times, each time discovering something new about the characters or finding previously overlooked expressions of the themes, or whatever.

This is, ideally, always the case with rereading, whether the initial read through was especially hard to follow or not. Sometimes, however, the payoff is accidental - what you find when you reread the story isn't some broader or deeper truth but just the story itself, not initially hard to follow because of all that "hidden" depth so much as because it, well, has problems.

So it is with this chapter of Smallville. First time through, I was confused - Why did Kara zap only one of those "gravity buoys"? What are those things again? Does that dude really sport mutton chops in the 31st Century? Why are Rokk and Imra working with EarthGov? Wait, on whom is Kara spying? But rereading allowed me to clarify most, if not all, of that.

Here, though, are my lingering issues.

The "gravity buoys" make no sense - did they all just appear in some game of thermal dominoes after Kara heat visions the first one? They appear to form some kind of space runway, but if they're also the "only way" Kryptonians can fly through space "with purpose" (whatever the hell that means), why is it that when she flies off and away from Clark, she goes up and over them altogether? Come on, Smallville, if you're going to throw a new concept at us that seems to change certain well-established rules (i.e., Kryptonians need help to fly within the solar system), you're going to have to do better than simply invoking "purpose" to explain it. Only The Matrix is allowed to do that; I'm sorry, but it's the law.

Worldship? I'm all for making up new words, but this one just... sucks.

Those EarthGov agents were surprisingly easy to catch and stop, weren't they? What was the point of them and their ability to withstand telepathy again? Also, I realize that my initial impression that Rokk and Imra were the EarthGov agents is a result of the use of one of those delayed-dialogue-completion transitions, where we move visually from the sinister Minister (oh yeah, Bela Fleck fans!) to New Krypton just as Niedrigh is saying his agents are already in place. Then we see Rokk and Imra, in disguise. What are we supposed to think? And I'll say this much: that would at least have had the virtue of being unexpected!

In truth, the only thing I enjoyed about this issue was that it forced me to work a bit to figure out what to say about it.

My initial confusion over which side Kara is actually on, despite her clear mention of being extracted back to New Krypton, had to do with both the way she flies off back to Earth the minute she lets Clark in on the secret as well as Beh-Osk's critical mention of her as evidence that the Legion is not out to ensure peace. Clark being worshipped at kneepoint at the end? This is probably supposed to be a clever inversion of the classic "Kneel before Zod!" but, for me? Well, I can see how some Clark character work can come from this - Clark has earned himself some praise as both The Blur and Superman, but never on this scale. Indeed, I still expect to see him struggle a bit not to want to stay here, and this seems like a reasonable way to initiate that conflict. But on its own kneel-before-Kal-El merits?

Zzzzzzzzzz. But that's just me.

Art - 4: No real complaints about the art, however, except for the mobs with pitchforks scenes. The citizens in these panels (Kara's flashback to the beginning of the war, the end on New Krypton) are just so... conventional, with the clenched fists raised in self-righteous anger and mouths inaudibly agape. You half expect Christopher Lee's 1970s Dracula, pale-faced and plastic-toothed, to emerge from the smoke and sneer at them all - especially since your other half, your story half, wishes he would.

Cover Art - 5: Nice cover. Staggs usually delivers and this is one of those times. No appearance in the story (that I noticed) of one of these holographic leaflets or whatever the hand at the frame's lower left is supposed to be holding, but even if it never shows up inside it's a nice nod to the fact that the story is set in the future. It's also a good likeness of Laura Vandervoort, if that's a gauge of success for you.