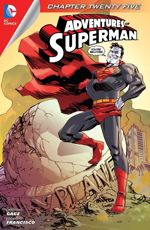 Cover Art - 4: Please allow me to introduce myself, ME AM BIZARRO! Hahaha! Me am so sad not to be there, hurting Shawn Morrissey again who am not the every week reviewer of Adventures of Superman and who am not asking me again for hurting. Because actually, thanks to the recent conjoining of Superman's compassion and Dr. Emil Hamilton's intelligence, me am become quite articulate, thank you very much. I mean, I have become quite articulate. And me am as ugly Bizarro as always! You're welcome!

Art - 4: Is that my face? Me am not so handsome, am me? I mean, not like Superman. Oh happy - I mean sad Bizarro! Me am thinking... What have I been thinking? Ignorance am despair? What bliss, you say? In those flowers? Still and all, me am still preferring my haircut to his!

Story - 4: I may not have much time. Superman was in trouble and, wouldn't you know, only I could save him. So I did. It's what I'd been trying to do all along, of course - help - only I guess I was always doing it backwards. Crazy, right? "Me am Bizarro, me am sad not to shout bad day to you!" I totally see it - of course I was the villain. But that all changes today - I will be a man of clearer words and even clearer action. You're welcome... I mean, thank you Superman and Dr. Hamilton! No more senseless wreckage and scaring the pretty people, and no more letting Superman fall victim to the better plans of his adversaries, like puny Toyman using Kryptonite today, which doesn't hurt me the way it does the Man of Steel. I have no idea if these changes will last - indeed, I fear the inevitability of reverse even as I yearn to accelerate forward and test these new limits. But there's something pleasantly derivative about this, just the same. And I'm sure that whatever is meant to be will be, assuming anything is meant to be at all. Now, there's a thought...

This is the story of Bizarro's - my - awakening. Just don't call me Algernon. I am not share... I will not share his fate.