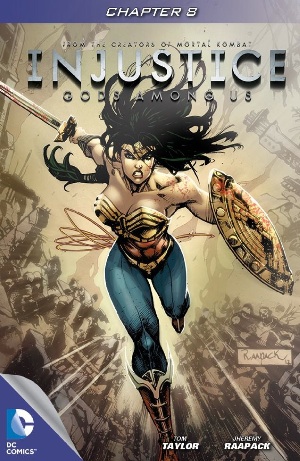 Injustice: Gods Among Us - Chapter #8

"Injustice: Gods Among Us" - Chapter Eight

Click to enlarge
At the Watchtower, Wonder Woman attempts to rally the Justice League behind Superman and succeeds. Priority one: Save the Kents. On Flash's recommendation, the team spreads out across Central City to confront members of The Rogues, one of whom is expected to know where Mirror Master is. Ultimately, it is Flash who gets the information out of Captain Cold - Mirror Master is in the World's End bar in Keystone City.

Wonder Woman and Flash find their quarry, and though his presence is but a projection, Mirror Master is not as safe as he thinks... suddenly, Raven appears behind him in his mirror dimension and forces him out of a mirror in the bar, where Wonder Woman is waiting with her lasso and doesn't even have to ask: "They're in Bolivia!" he tells her - more specifically, the Salar de Uyuni salt flats, which acts as a huge natural mirror. Flash immediately gets the information to Superman while Wonder Woman tells Mirror Master to remove his clothes. Flash then races to Bolivia with the belt from Mirror Master's suit, which will allow Superman to enter the salt flats' reflection.

Soon, at the White House, a general advises the President that the plan has failed. In turn, the President tells the general he will have to find another plan and then enters the Oval Office. Inside, he is surprised to find Batman waiting for him to let him know that apprehending the Kents was an "incredibly stupid" move and that the President must be naïve if he thinks the League wouldn't apprehend him in turn. The plan failed, says Batman, and in a way that will unite the heroes behind Superman. (Back at the salt flats, Superman has emerged with his parents, none the worse for wear, with members of the League assembled quietly before them.) The President notes that Batman, by saying "them" not "us," seems to have removed himself from the equation of union behind Superman and expects it's because Batman understands that power corrupts.

And the President says, "Trust me. I know..." as he turns to find Batman is no longer there.

Story - 3: What can I tell you? I don't think I have much to say about this issue, to be frank. I liked the way that section of the dialogue between Batman and the President was overlaid over the visual of Superman and the Kents and the League in the salt flats, but otherwise this was pretty much just straight ahead progression of the plot. In my estimation, we got exactly three things: some new characters (even if only cameos) and two primary plot developments, (1) that the Kents do not, in fact, die (at least not yet, but I gotta say if Superman is "fooled" again on this one, I'm going to start siding with the Homepage membership's very own liheibao - so, come on Taylor, don't do that to me! LOL!), and (2) that Batman will be lined up in opposition to Superman, which, well, we already know.

The Superman-got-his-parents-back moment was touching, using the Salar de Uyuni was cool, and everything else was pretty stock - neither exactly "bad" or "good," just average. Probably we're being lulled ahead of the next catastrophe, because with Batman seemingly on a bit of a fence ("He is trying to bring about peace"), obviously the shattering of everything we hold dear has not yet been completed.

Art - 5: I believe I've said before how appropriate I find the art for this story. Nothing about this week's issue makes me change my mind about that.