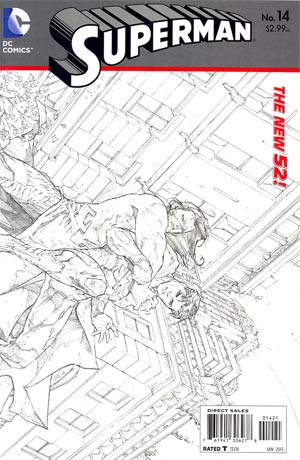 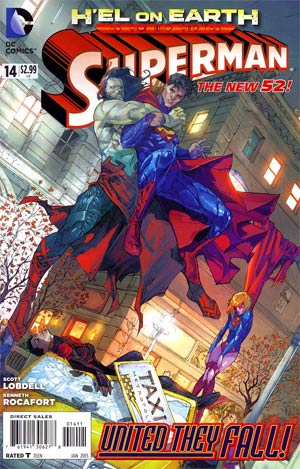 "H'El on Earth": "Build a Parachute on Your Way Down"

Click to enlarge
Lois arrives at Clark's apartment and is determined to see him. A disheveled, tired and bruised Clark opens the door and immediately worries his friend. The bomb site that is his apartment doesn't help matters. Lois tries to convince Clark to come back but her choice of words and dismissal of his integrity only serves to anger Clark and he reveals that he knows that she has hidden the truth from him about Jonathan and her moving in together.

Lois is taken aback that Clark knew and even Clark is shocked at his actions and words. He would never have normally used his powers to spy on a friend... or perhaps someone he regards as more? Lois recovers fast and points out she too has noticed Clark acting out of character and that he would have tried to talk her out of the move. She notes Clark has been oddly cheerful and that she has deduced it's due to a change in his love life. Clark knows that woman is Diana Prince/Wonder Woman but how can he tell her?

A voice interrupts. (See the recent chapter in Supergirl #14). Lois sees Kara as a 'comely cosplayer' arriving at Clark's bachelor pad for a blog interview. Lois, eyebrows raised, can't believe her friend turned down his career at PGN to write a blog but doesn't have a chance to question him as Clark nudges her out of the door and literally yanks Kara inside.

Within an instant Clark is Superman and the two El's are in Centennial Park. Clark gives Kara a telling off for almost destroying his identity as Clark Kent. His teen cousin doesn't really see the significance of living as a human but it's in that instant that Clark notices that Kara is able to speak English.

It is then that H'El reveals himself, embracing his 'baby brother' and H'El reveals his origins to a dubious Kal-El. He was an astronaut on Krypton, mentored by Jor-El to man a test spacecraft that would be able to explore space while also testing its ability as a vessel to carry Kal away to Earth should Jor's predicted fate of Krypton come to pass. The journey led to H'El being exposed to black stars, quasars and all manner of radiations and influences on his way to Earth where for some reason he had been delayed by twenty seven years.

Clark doesn't believe any of it. Knowing his parents fate and some of Kryptonian history, H'El's diatribe doesn't make sense. Kara is more open to H'El's interpretation and realizes she is wasting her time trying to reach out to Kal. H'El decides to back up his interpretation of facts by offering up something all Krytonians cannot deny... a sample of cloning. What better way to show his knowledge of the clone wars than to offer up Kon-El as a corpse to Kara and Kal.

A fundamental difference between the El's pops up as Kara and H'El refer to Kon as 'clone' and Clark refers to him as 'boy'. To protect Kon Superman hurls him away into a nearby car lot, Kara questions this as action that almost harmed his 'precious humans' but is surprised to learn that Clark had deliberately hurled him there, calculating his actions to ensure nobody would be hurt.

Clark asks his cousin to look after Kon while he tries to reason with H'El. The devastated villain reveals he was behind the zombie dragon attack and has only tried to reach out to Kal in respect for his mentor, Jor. The cars in the lot begin to blow up and Kara dashes to Kal and H'El's aid in return H'El masquerading as Kal does his best to belittle, insult and beat his 'cousin', hanging the now betrayed and devastated teen from a lamppost. Kal recovers and realizes that H'El has deliberately been manipulating Kara, especially with his 'act' moments ago.

H'El reveals that he needs Kara to be estranged from her cousin for his plot to save Krypton to work. While beating Kal to a pulp he tells him he has watched Kal through his life on Earth and is disgusted that Kal adopted a 'slave name and identity'. As he is about to kill Kal Superboy, now awake, intervenes giving his genetic donor a moment of respite.

Superman is shocked that the boy who just saved his life has taken on the name "Abomination" watching as H'El reveals further information. Kon is not just a standard clone, he is a horrific hybrid of Kryptonian and 'plebeian' human DNA and does his flesh ripping act again (see the recent Superboy #14). Superman orders H'El to stop and asserts himself as Kon's bodyguard.

H'El teleports them to another location in the city and reveals that he knows three years ago Clark had failed the people of Suicide Slums. He says only his loyalty to Jor's memory have ensured Kal is still living but then flies away to rendezvous with Kara.

Story - 3: Some of the book is a pleasant surprise and then the glaring mistakes ruin it. Are they deliberately trying to muddy H'El as insane or just rushed editing? H'El states at one point that he arrived 27 years after Kal meaning he only knows Kal in the here and now, yet later in the issue he makes a point of berating Kal for being a human part time and even citing a failure in Superman's career 3 years ago. Then there is how Lobdell gets out of the dilemma Supergirl #14 left him, Supergirl is a 'comely' cosplayer? Clark has no connection to the Superman family in his entire time over the past 25 years. With all the adventures even with the 'reveals' in the opening monologue and Lois being a world class journalist... No connection is made? Ok...

Can we give the villains with verbal diarrhea and the excessive inner monologuing a rest?

Art - 3: The frenetic penciling certainly married the equally fast storyline well, though a few things are disappointing. 1. Clark and Superman have the exact same hairstyle in either identity. 2. I couldn't help but notice the unique interpretation to Kara's underwear... I get that she's got to fly the sex factor flag now that Power Girl covers up her breasts but this is just a bit naughty, perhaps I'm being over analytical? 3. Each issue has H'El look different, completely different. In Superboy he looks like a human, in Supergirl, more alien than human with jet black eyes to boot. Here though, H'El looks like a deformed zombie. I know interpretation is a factor but the character looks completely different each time.

Cover Art - 4: Love this cover, hate the coloring. The print ads with muted colors works so much better than here where it is over saturated with darker tones.