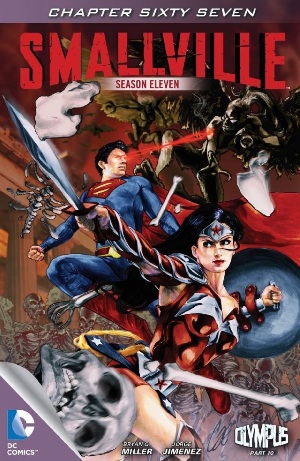 Click to enlarge
Superman fights Hades' Washington Monument Monster! Harpies attack Air Force One! Superman beats the harpies, uses Morse Code to explain they're transformed humans not in control! Diana saves the DEO lady! The Monument Monster puts the hurt on Superman! Hades is gentle, maybe because he's more an other-dimensional being with mommy issues than a god! Faust alerts Hades to Diana's approach! Hades calls down the harpies! Oh no, they got Steve Trevor!

Story - 3: Fast-paced and action-packed carries the day this week. Superman tapping out that message in Morse Code is a bit over the top (the whole thing is bound by their limitations, not his) but, maybe because it's Air Force One, the mood of it works, with the salute as he flies off and everything. No idea why Hippolyta's daughter is automatically that much more the threat to Hades than Hippolyta herself (other than that she's Wonder Woman), but I take it that's the point - all will be revealed, and everyone will call her Wonder Woman and there will be smiling and laughing and the tears of once and forever parting, as either Steve Trevor isn't going to make it or, in his Ollie-ness, he'll end up staying behind in Metropolis and, though neither of them will really want her to, Diana will return to Themyscira. At least for now.

I've discussed before some of the general reasons this story hasn't much piqued my interest. Ultimately, I think it's mostly the confluence of my not being much of a fan of Wonder Woman to begin with and the characters introduced in this arc not being developed to any great extent. Steve is abducted at the end of this chapter, and my guess is it will lead to a climax that has Steve in some kind of sacrificial black magic predicament that only Diana can stop. But why do we care about Steve? Because Diana does. But why does she? If this was the first Wonder Woman story you'd ever read, would you know?

It's classic Smallville, though: depending on its audience to supply not merely important information but also a response to it through familiarity with the characters in other media. Never mind that this is a super-hero comic: that's not an especially good "world building" strategy. If Smallville has grown its world, it has grown outward, thinly. An occasional bout of fan service is one thing, but to convert all the new readers they're seemingly obsessed with into recurring and permanent ones, maybe it's time to limit the sprawl and go for depth.

Art - 4: As I can't retroactively change the score of a previous issue, the reduced-from-the-5-that-had-become-the-norm this week is owing to it really being a problem of the artwork that it wasn't clear last time where that giant hand came from. Here we learn that it was in fact the Washington Monument, transformed, along apparently with parts of the Lincoln Memorial, and we learn it through dialogue. Long live the written spoken word! LOL. This week it's also abundantly clear that that initial arm does indeed expand into an entire bipedal-type monstrosity, which last time it wasn't clear that was the idea. Otherwise, Jimenez is spot on as ever.

Cover Art - 5: Cat Staggs at her best. Classic composition and, better still, it reflects what actually happens beneath the cover. Nice.