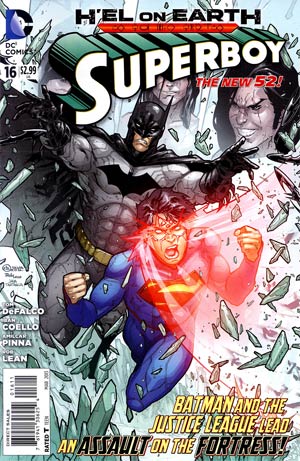 Click to enlarge
Superboy reiterates his status as a living weapon, the recent events that have him wearing Superman's armor to live, and having to break into the Fortress of Solitude alongside the Justice League (as seen in Superman #15).

Batman, Wonder Woman, Flash and Superboy lead a frontal assault on the Fortress aiming to use Superboy's TTK as a disruptor on the forcefield H'el has activated. Wonder Woman has switched to a brighter costume with her traditional red boots and Batman has a thick fur trim cowl the change of wardrobe for the Justice League veterans is merely cosmetic but Superboy has to keep the armor on to stay alive. The side effect of its holding him together is a muting of Superboy's TTK. Originally Superboy could activate it at a distance using it in much the same way as Green Lantern's jade energy however now it requires a touch and intense concentration to work.

Defensive droids attack the trio but Bruce and Diana take them head on giving Superboy a chance to focus his power. H'el anticipates this and the forcefield has a prepared psychic backlash. Superboy's mind rewinds an hour and the team of Superman, Batman, Wonder Woman, Flash, Cyborg along with Superboy are planning their assault in The Block with Dr. Veritas.

Superman explains H'el's plot to drain the sun's energy to facilitate a time jump so he can prevent Krypton's destruction. Wonder Woman asks how, if H'el has all Superman's powers in addition to mental and physical abilities, they can hope to defeat him. Clark tells them that a shard of Kryptonite that is held in the Fortress may give them an advantage.

Batman has been preparing a strategic attack and we find ourselves back outside the forcefield and Kon trying his hardest to rip open the forcefield. Inside Supergirl is examining the technology Superman has in the Fortress and helps H'el to move his spacecraft. H'el continues to manipulate Kara by telling the impressionable girl that Superman is ashamed of his heritage and proceeds to cast illusions of Krypton. Cruelly he shows her its splendor and wonders and then as she begins to remember he shows it die. His trick works and Kara falls into his arms for support.

At the same moment H'el senses Kon's attempts to enter and steps up his plan. Outside as the forcefield finally dissipates Kon falls back weakened as Flash steps up and uses his mastery of vibrational planes to enter the Fortress. Elsewhere, Cyborg and Superman Boom Tube inside. Superman is a little disappointed it has taken them so long to get in but Vic explains that something was deliberately misdirecting the Boom Tubes. Evidence of this is their arrival into an ambush of Killer Droids from Epsilon-18.

Wonder Woman smashes the front door in only for the trio to be greeted by an army of more droids. Wonder Woman volunteers to hold them off while Batman and Superboy try to rejoin the others. Kon asks Batman why they are willing to leave a woman behind facing such odds. Batman points out that they would insult her by trying to protect her and concentrates on navigating through the maze of corridors.

Vic, like Kara is shocked by the sheer amount of valuable tech and 'souvenirs' and asks Superman if he believed he couldn't trust the League with safe guarding such treasures. Superman admits that he couldn't while finishing off the Killer Droids.

Superboy and Batman arrive in the hangar bay where, aside from a great many spacecrafts, there also resides the Kryptonite case. The problem however is that H'el has already stolen the deadly shard. Superman and Cyborg are just outside the Hangar and encounter one of Superman's deadliest of possessions, something he had hoped H'el wouldn't activate... An alien prison which continually teleports its prey into perpetual pocket dimensions via its deadly unpredictable teleport beams. Just as Superman rescues Cyborg from a beam's path, Superboy and Batman enter. To save Kon, Superman pushes his clone out of a beam's path but is caught in it himself and disappears for a destination unknown.

Superboy remembers his earlier thoughts about being a living weapon that is usually aimed by others but for the very first time he is taking charge himself and leaps into a beam path in hopes he can rescue the Man of Steel.

Elsewhere, a research team are investigating the Himalayas, trying to track down the source of tremors in the area (See Superman #1). Suddenly bursting from the ground a strange creature emerges howling:

"After months of silence - The Oracle heeds my summons - and a world dies!"

To Be Continued In... Supergirl #16 while Superman and Superboy's fate is revealed in Superboy Annual #1.

Story - 3: As part of the H'el story it was fast paced and engaging, not a danger to brain cells and not unlike the crossovers of old (such as Infinity Gauntlet etc) where nobody specific has a starring role. As the dangers amp up it fits in very well, with a sense of urgency that wasn't there in the Luthor chapter. However having said that the book really didn't give Superboy a chance to shine. Given the disparate interpretations book to book I was enjoying DeFalco's interpretation and Lobdell's radical new take on the Teen of Steel (in Superman NOT his Superboy run) it would have been nicer to see more of that explored. There was a brief glimpse of his naivety towards Diana that was a fun character moment but overall I think the book could have centered more on Kon's role.

As a side note the mistakes fly thick and fast, I won't list them all, I'll let you spot them and decide whether it's the writer, the artist or the editor at fault here.

Art - 3: The absence of R.B. Silva is definitely felt here. The stylistic feel is gone and it's evident that it was a 'pass the parcel' in art duties. It's loud, brash and oddly just what was needed this issue. I don't think it warranted four creative talents to deliver the book but it was fun to have a change of pace in the book.

Cover Art - 3: It might sound odd but Kon and Bruce are a very good fit. During the chapter they seem to work well and personality wise they are quite similar, at least in their moody broody outlook. It was nice to see them share a spotlight on the cover but I think Superboy should have been more of a focal point.