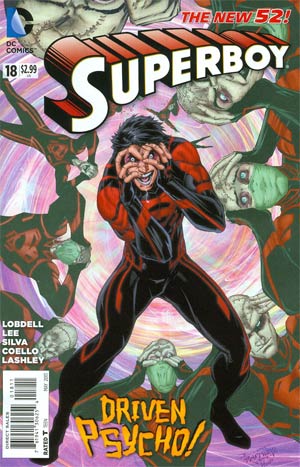 Click to enlarge
After the events in "H'el on Earth", Superboy learnt hard and fast some life lessons that have changed him profoundly. The Teen of Steel has grown a conscience and has returned to the city to return the money he had 'borrowed' minus the money he spent during his downtime. Though he vows to pay those expenses back to the bank too.

Developing a TK sense much like Spider-man's spider sense, Superboy detects someone else breaking into the bank. In bursts Otto Von Furth, aka PLASMUS! A giant clayface like being made of radiation and a kind of superheated lava. Plasmus was told he would be able to steal money from the bank unopposed, but instead finds Superboy and immediately goes on the attack.

Superboy had been using his cocky humor to distract Plasmus, however as the villain proves more than a match for him, Superboy has to use his focus and ensure his TTK field stays on while he endures a brutal beating.

Elsewhere in downtown Manhattan, a dwarf who possesses mental powers under the guise of Dr. Psycho, uses his abilities to read minds and memories to con rich unsuspecting customers.

An alert from citizens outside that have been racing from the Superboy/Plasmus fight has caught Psycho's attention, and when he discovers a source of super powerful TK Dr. Psycho is almost uncontrollably drawn to Superboy. Psycho is literally drawn out of his body and directly into Superboy.

Suddenly inside Superboy's head Psycho finds he is not in the battle but a tank of fluid, a memory of the boy's past. An explosion of thoughts fills the stranger giving him full access to all of his memories up to today, N.O.W.H.E.R.E, The Ravagers, The Teen Titans, his socialite landlady, Caitlin, everything... But while he tries to examine and organize the thoughts a punch in the real world from Plasmus sends him flying out of Superboy's mindspace and back into his own body.

Psycho barely has time to introduce himself to Superboy before the German lava creature smashes into the teen. Psycho is astounded to see Superboy in action, he had assumed, like Superman, that his powers were physical, but watching and feeling the excess of TTK energy Dr. Psycho realizes that if they are both mental power based then he can grow stronger by becoming Superboy, and tries again to take over Superboy's body.

However, Dr. Psycho doesn't find what he did before, instead he finds and endless dark space, with no body to take over. He isn't alone in the boy's head however and the psychic con man is greeted by Lex Luthor in a battle suit.

"Finally, I have been waiting for you. It is time for you to learn who you are."

Story - 3: Some of this issue was a lame duck, some not so much. I like that Superboy has grown, he has learnt that his theft was wrong and he is finally moving along the right track. However, this throws a wrench in his life at the expensive apartment and the mystery involving his landlady friend.

I am disappointed with Plasmus, and his cheesy racial stereotype dialogue but I was intrigued to read about Dr. Psycho, a small time thief that has stumbled into Superboy's own Fortress of Solitude, his mind.

I should imagine that the Lex floating inside Superboy's head is much like Jor-El to Superman, as he doesn't sport the scar across his face and it is a recording has mistaken Dr. Psycho for Superboy himself.

I am disappointed how little happened in the story but as it's the first in an arc following on from quite a long crossover it is also a welcome change of pace. I hope that Plasmus and Dr. Psycho get fleshed out more and that we get a bit more than a throwaway glimpse at the new experienced Superboy.

Art - 4: The art was very mixed bag this issue, scribbly in places and heavily inked in others. It still looked great, Plasmus may be a bit weak as a character but he looked pretty cool in action. Many will not notice but the jump in styles is clear when you really look. It doesn't detract from the issue, just a minor irritation.

Cover Art - 3: I really dislike the cover, I can't pinpoint exactly why. It does the job of giving you the impression that Superboy is under mental attack, it just goes a little too far as it looks like Superboy is actually going insane to me.