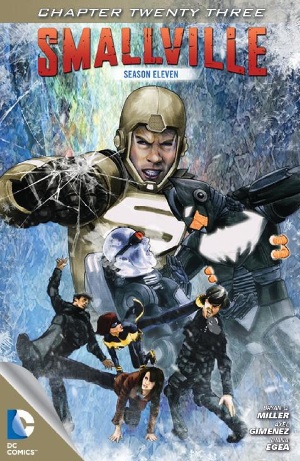 Click to enlarge
Loomis's grand prank is set in motion at Nellis Air Force Base, where a tampered Captain Carrot action figure from an air traffic controller's "happy meal" triggers the launch of a trio of stealth bombers. Over at Fries' hideout, Superman and Batman are confronted by a mech-suited Prankster who reveals that he has taken control of Freeze and set him loose to wreak havoc in Metropolis until his power suit overloads and kills as many people as possible. Oliver's boxing glove-tipped arrows are of little use in this situation.

Meanwhile, Leviathan's security system has alerted Lois and Barbara to the approaching thugs. They (Lois and Barbara) hold their own in self-defense until a lull in the fighting brings a distraction sufficient to allow a group of the thugs to get within point blank range. Cut to Superman's battle with Loomis, where even after the mechanically-assisted Prankster tears the Wayne-made shielding suit off Superman's body and exposes him to Kryptonite, Superman prevails by shorting out Loomis's suit and bringing the roof crashing down on it with his heat vision (thus nullifying the effects of the Kryptonite) after hauling Loomis clear.

Loomis, held aloft in Superman's grip, then gloats that "their blood" will be on Superman's hands, not just his, and that he, Loomis, has won.

The stealth bombers from the Air Force base have just fired on Leviathan.

Story - 5: Here's the weird thing: although I continue to struggle with why any of what has been happening in this story has been happening - what it all means, if I can be so cliché - nevertheless I found this particular chapter to come closer to the way Smallville acted on me generally than any previous chapter. It's the little things, of course, and I'm pretty sure the final scene in particular, where all the energy moves electrifyingly into Clark having to super-speed against impossible odds to save someone he cares about (usually his love interest, as in this case), is most of it.

Of course, the release of that energy would most likely have occurred within minutes after being set up if this still was a television show, not days (excepting the occasional cliffhanging two-parter) from now, but the feeling is there. It's ineffable, maybe impossible to actually describe. But it's there, just the same, where before it hasn't been. Not all of that is necessarily good, but it's better, just the same - sum is greater than the parts kind of stuff.

You may not have felt it, or perhaps you always do. But I don't, and did. It was there in the dramatic irony of having the air traffic guy, off-panel, use the word "prank"; in the coyness with which Clark acknowledges Prankster's Kryptonite; in the way Freeze announces he's not in control of himself and the police, with all seeming sincerity, respond by asking him to stop; in this Green Arrow being ineffectual if it means comic relief; in Prankster's brief mention of "The Blur"; in the too-convenient way Supes is able to take down Loomis's suit; and, of course, as mentioned, in the ending.

Some of these kinds of things are probably always present, but this week it just seemed to add up to a... presence I've not felt, since... Oops, wrong universe. That's how comparatively powerfully I'm feeling this.

(Except from Captain Carrot. On the television show, that would have been Warrior Angel or Devilicus, and I'm kind of disappointed such wasn't done here. But this is tiny unripened potatoes, really.)

But, so, yeah - this was Smallville, for better, for worse, and for everything both transcendent and in between. Cool.

Art - 5: The all-new artistic team on this week's issue has, I think, just produced some of my favorite work on this title so far. Pencils in particular have been unstable of late, and it's my hope that both Gimenez and Egea stick around for a while. Can I get an Amen?