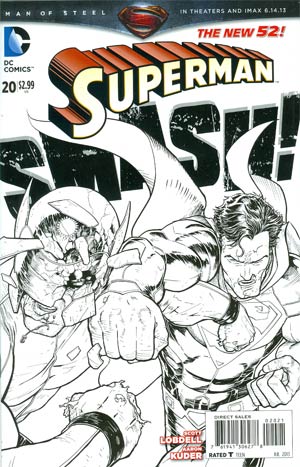 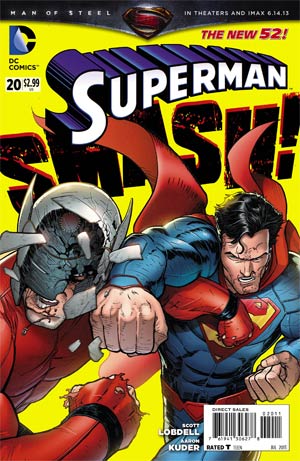 Click to enlarge
Clark hovers out to his apartment balcony for breakfast with Jonathan and Martha Kent. His parent quip about his super career and mention the likes of Brainiac, Luthor and Doomsday before Clark's wife Lana appears with their puppy Krypto. As Jonathan readies a cheerful Krypto for a walk, Clark kisses his loving wife. A dark shadow engulfs the balcony and Lana looks upward scared by what she sees.

A giant fist completely obliterates the building and smashes Clark in the back. Suddenly Superman finds himself back in battle with Orion. Was it a dream? Clark hasn't time to find out as Orion slams him into the waterfront. Superman scans the nearest building, the Waterfront Museum, and returns the favor by uppercutting Orion through the building.

Astounded by Superman's power Orion is taken by surprise as he is buried by a flurry of fists deep into a nearby worksite. Again tit for tat Orion punches Superman through a construction crane back into the water, followed by picking up an aircraft carrier ready to slam Clark into the depths. Superman primes his heat vision in retaliation and melts part of the ship around Orion and the searing heat turns into a mass of steam, metal and water that temporarily buries the New God.

Wonder Woman arrives and stands side by side to face the mysterious foe that snatched Clark from Lois' party, but to her surprise she comes face to face not with a monstrous foe but the unruly Orion. Reacquainted, a momentary balance of peace is awarded as Orion explains why he believes Superman is a deadly threat.

As Wonder Woman wraps her lasso around Superman's arm, she points out it might not have as potent an effect on him but if Orion is right earth born Hector Hammond should be driven out. Sure enough the fat headed villain appears in psychic form and is driven back to his body.

Before he can enter Orion uses his Mother Box to erase any memory or fact he might have learned from or about Superman while hiding inside his mind essentially returning Hammond to his vegetative state in S.T.A.R. Labs. As a parting gift the New God uses Mother Box to install mental walls inside Superman to prevent it from ever happening again.

Orion steals a moment with Diana and asks if she is ready to discuss their kiss. Wonder Woman refuses to enter into anything brushing off the talk. Whether Superman can hear the talk or not he whispers 'Jerk' as a goodbye to his would be killer while Orion shrugs off the encounter to return home.

Diana attempts to explain how the two Gods know each other but Superman ushers silence and agrees to spend the night away from family, friends and superheroics.

As the two lovers embrace, Superman can't shake the feeling that Hammond may have done some damage to his memories before he was ejected. In the arms of Diana he shrugs it off but is uneasy.

In the depths of his psyche we find the apartment building wreckage and a walking corpse emerges from the rubble. Clark's wife, Lana, from his false memory stumbles out, all grey and cracked like smashed marble, calling out for her loving husband who is nowhere to be found...

Story - 2: It may seem harsh but the build up to this issue was fantastic. The nightclub revelers, the odd behavior at the PGN building and Lois' party. The strange team of agents that have been monitoring things etc etc and then throwing love rival Orion into the mix. It all added up to something that was very promising. What we got was a very anticlimactic end and that was really a miss for what could have been a landmark story for the new DC.

The big battle was 'He smacked me so I'll smack him' with no meat to it. If Orion was in character I'm sure he wouldn't have missed the opportunity to mention his kiss to Superman just to relish the fight. Instead he just kept squealing 'oh my' at Superman's power level and yes I was really hoping for Superman to have a real epic fight.

Then we throw in Diana and the story is over. Hammond is hurled back to his body and returns to his coma as if the story never happened. Indeed the Deus Ex Machina that is Mother Box wiped his memory and ensured that would be the case. The magical box also altered Superman's psyche to block out mental possession so Hammond can't do it again if he ever thought to retry it for the first time.

I'm pretty annoyed that the kiss was just swept away, in terms of story that could have really upped the ante and also linked the Wonder Woman and Superman books further. Not to mention the heavy foreshadowing in the books and by DC PR promising it would be a showdown of mighty proportions - which it wasn't.

A disappointing end to what could have been the new volume of Superman's first big story.

I am intrigued by the scenes in Superman's mind. We haven't really seen the Kents alive and know they die on prom night so the little bit of characterization was very welcome while also bittersweet to what we - and Clark have lost. Lana is an unexplored element as an adult and now she is a sort of Bizarro Lana living in Superman's mind I am intrigued to see where this thread goes. This last minute twist was the only plus for me.

Art - 3: Very Frank Quitely in style and execution. The art was pretty slick with some great splashes but it's disappointing the fight wasn't more close up. The distant camera angle used made it somehow less action packed. The reader being in the distance rather than 'in' the action pulled us away and makes me think it would have been far more epic if the fight was focused more on hand to hand combat.

Cover Art - 5: This is a fantastic cover, I'm all for Orion taking a beating and Superman smashing his helmet to pieces is just awesome. The Man of Steel would certainly not hold back in a fight with his love rival.