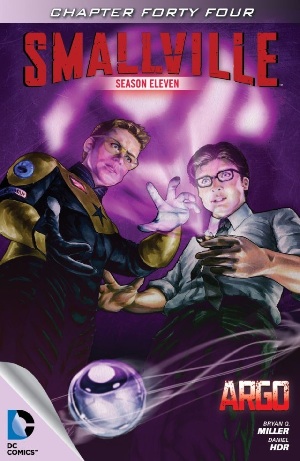 Click to enlarge
Booster Gold tosses Skeets like a football into the air above the group of EarthGov agents surrounding Superman, Lightning Lad and Brainiac 5 - Skeets gives off some kind of electric pulse and down go the agents, allowing the heroes to go free. Brainiac recommends a disguise for Superman - different hairstyle, glasses and a red jacket. They discuss the Legion Ring protocol message that preceded Booster and Superman being teleported to the 31st Century, and Brainiac tells them that the protocol doesn't exist. Brainiac then wants to know who Booster is, but Superman interjects and forces the conversation over to the matters of his accidental time traveling and this so-called New Krypton.

Turns out the Kandorians from Season 9 have returned - in the form of their descendants, who have flourished on the planet Clark sent them to, Argo, for the past thousand years. Their struggle with Earth began when they were denied membership in the United Planets, but has since escalated thanks to certain other actions EarthGov has taken...

Meanwhile, over on an EarthGov Holding Facility, Minister Kirt Niedrigh is demanding of the governing council that the prisoner be moved to a more secure location. He's not happy about the aliens living among them, but the council says that having those aliens around keeps the funding coming in. This current prisoner is also of significant strategic value, but Minister Niedrigh warns that "he" will eventually come calling.

Just then, the facility is shaken by a powerful force that nearly knocks the Minister over. "Oh, no," he says - Superman has torn through the facility's wall. The alarms are sounded and Superman says he's not taking any sides in the ongoing conflict. They use a red sunlight flashbang on him, but that only delays him momentarily. He's just there to free the prisoner, he says.

He's just there for Supergirl.

Story - 3: So, that was pretty predictable. Not unwelcome, just not surprising, even though surprise is exactly how it's played. Otherwise kind of a snooze, this ish - necessary world and character advancement, yes, but less than thrillingly conveyed.

One (conceivably rhetorical) question: What happened to the disguise? The Legion only just gave it to him and he wears it only in the presence of allies. Was there any purpose to it other than to show us Clark in a red jacket again, like old times? The cynic in me is compelled to point out how on the show they did everything they could not to put him in a recognizable costume and now in the comic they keep putting him in all these different costumes only to come back to the recognizability. It comes off as a bit schizophrenic to me.

Good move to have New Krypton connect to the Season 9 Kandorians, though this too is not exactly surprising. But that's ok - it's coherent and measured, and those qualities are always worth a bit of praise.

Art - 4: Pencils are improved this week, which is nice. I find that, overall, the colors on this book have tended to be consistently good and sometimes great, while the pencils are much more erratic. Whether that says anything about the individual arts of penciling or coloring or both or neither, I'll leave for you to work out for yourself.