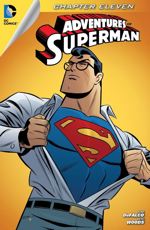 Click to enlarge
Lunchtime at Sadie's Diner, and Phil and Moze are in for their usuals. Moze, the big lug, has some concerns about the meteor on its way towards Earth. Phil, the uninformed skeptic, isn't convinced - as usual. The duo talk through lunch about stuff Phil doesn't believe in: anthropogenic climate change, an honest press, and Superman. Moze is aghast! And who wouldn't be? Oh, Phil believes Superman is real, just not that the Man of Steel is actually super-powered and is simply a distraction from the government, in cahoots with the press, to keep the populace ignorant to real issues. Moze pushes but there just ain't no convincing Phil, evidence be damned.

As the two leave, Phil bumps into his neighbor, Clark Kent. 'Salt of the Earth,' says Phil of Kent. 'The world would be a better place, Moze, if there were more Clark Kents.'

Story - 4: There's a rough spot here and there in this story worthy of criticism, but its charm and wit hold it all together. One point I had a hard time swallowing was the Daily Planet's headline concerning a meteor. Now, I know some people don't follow news, and others are very selective with the science they choose to 'believe in,' especially when science disrupts their own well being or rattles their outdated notions of things, but a meteor is something that doesn't just get a headline on the day it's supposed to hit Earth. Our man Phil not being convinced, however, is the epitome of the underlining theme of this tale: skepticism for skepticism's sake.

What's worse than a conspiracy theorist? Someone who thinks conspiracy theories are purposely designed to keep us all in the dark to real matters. (Ironic, that.) That's Phil. Moze somewhat represents another position: the blindly accepting. Phil doesn't believe the evidence, and Moze doesn't understand the evidence, he just believes what he reads. The final scene revealing that Phil, the hard nosed anti-conspiracy theory conspiracy theorist, is Clark Kent's neighbor is beautifully well timed. It makes the story crackle like a Superman story should, even though Superman himself isn't exactly the focal point.

Art - 4: The art is crisp, the kind of cartoonish style that I enjoy. It suits these one-shot digital stories well, as the stories tend to be lighter and more jovial than their monthly pamphlet counterparts. I particularly like Superman in this issue. I have a soft spot for the sweater look, which likely stems from my love for the Kirk Alyn serials.