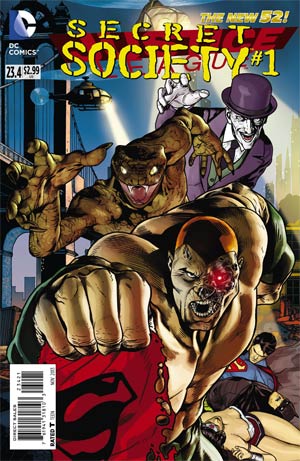 Click to enlarge
This story occurs after Forever Evil #1 but before Forever Evil #2. It is mostly told from the point of view of the Outsider, who is the Alfred Pennyworth of Earth-3. As you probably know, Earth-3 is a parallel earth and the original home of the Crime Syndicate, a team of super villains who are the evil counterparts of the Justice League. The Outsider works for Owlman, who is the Earth-3 version of Batman.

On Earth-3, many things are backwards from our Earth. The sun sets in the east. The continents are flipped around from ours. Historical facts are all jumbled compared to ours.

This story begins on Earth-3. A family of three is running for their lives. They are running from the police, who are corrupt. The police are controlled by Owlman with the Outsider's help. Instead of producing their wallets and purse as ordered, the family members pull out handguns and engage the crooked police in a gun battle.

Alfred is driving (perhaps in the Owlmobile) and is tracking Owlman. His job is made trickier because Owlman is operating at the rooftop level in Gotham City, and is cutting across the rooftops. As Alfred proceeds, he is communicating with Owlman, who asks him about Talon. It turns out that Talon is the Earth-3 equivalent of Dick Grayson/Robin; who is Owlman's young partner.

As he reminisces, Alfred reveals to us that his partnership with Thomas Wayne (Owlman) began after Alfred killed Thomas Wayne's parents. From that day, Thomas has been driven to control Gotham City.

We learn that the Earth-3 Joker is not crazy, although he pretends to be. Joker has been trying to loosen Owlman's grip on Gotham. They are sworn enemies.

Joker leaves some gift boxes for Owlman. When Owlman opens them up, he sees the dead body of Talon, killed and cut up into pieces by the Joker. Owlman was not there to protect Talon because he was busy having illicit sex with Superwoman. Owlman and Superwoman have been having an ongoing affair despite her marriage to Ultraman.

Owlman show's surprisingly little regret for the death of his former partner.

Joker splashes some of his laughing potion from his boutonniere onto Alfred's face, causing Alfred to laugh uncontrollably. Owlman gets his hands on the Joker and tosses him from a rooftop, with fatal results. Owlman administers an antidote to Alfred, saying he needs Alfred more than ever now that Talon is gone. The police, riding in helicopters, observe that Talon and the Joker are dead. They feel that while Owlman is distracted, they see this as an opportunity to get out from under Owlman's control. They begin shooting. But by using some well-tossed grenades, Owlman takes down the helicopters.

Ultraman contacts Owlman because the skies have turned red, possibly indicating that something new is attacking the planet.

One week later, the barrier between our earths is weakened. We know from reading Justice League #23 that this is caused by energies unleashed When the Justice League of our earth first battle Darkseid. Two individuals escape from Earth-3 at that time. They are the Outsider and Atomica, the evil counterpart of Atom. None of the other villains get through the barrier.

After arriving here, Alfred vows to do everything in his power to help Thomas Wayne find his way here. So Alfred builds an evil army called the Secret Society of Super villains. We know from Justice League #23 that the members of the Secret Society help the Outsider secure Pandora's Box, which acts like a Mother Box to open a gateway between Earth-3 and our Earth. This allows the Crime Syndicate to travel to our world. Now the Crime Syndicate is planning to take over our Earth.

The Crime Syndicate members have captured Nightwing, the Dick Grayson of our Earth. (This was revealed in Forever Evil #1.) They plan to ask Grayson to join them. But the Outsider would prefer to see Nightwing killed.

Story - 4: This story neatly ties together events from the end of the "Trinity War" in Justice League #23, and the first issue of Forever Evil.

But the logo on the cover is very misleading. This is not really a Secret Society book. They appear in one panel; the splash on page 18. Rather, the focus here is on the Outsider. That is the name that should appear on the cover, scrawled over the Justice League logo.

As I said in my review of Justice League #23.2 (Lobo) two weeks ago, I like the idea of "Villain's Month". Weekly comics in September featuring the villains have provided the opportunity to give us the definitive origin story for each major villain in the New 52; and to reinterpret those villains who need a fresh start. Here we learn everything we need to know about the Earth-3 Alfred. There was much here I had not known before.

I need to end on a personal note. After several years as the regular reviewer of Justice League, I am stepping down. It has been a distinct pleasure to review Justice League. It is probably my favorite regular comic book. It has been perhaps DC'S best regular book since the New 52 relaunch. Looking back, Geoff Johns has given us entertaining and intriguing story arc after story arc. Think back. We had the Darkseid saga, featuring the origin story for the Justice League in the New 52 DC universe. We enjoyed "THE VILLAIN'S JOURNEY," featuring David Graves in a very unusual and interesting story. We had the introduction of the Superman/Wonder Woman relationship, which was partially fleshed out in the Cheetah arc. "Throne of Atlantis" came next, an Aquaman-centric story. And of course, the recent excellent "Trinity War". Along the way, we had some terrific stories featuring Billy Batson/Shazam. All of these stories have been of consistent high quality.

I am passing the baton to Michael J. Petty. He is excited about his new assignment, as well he should be. I know he will take the baton with enthusiasm, and write some excellent reviews on this title. Please give him the same support you gave me. And that reminds me to thank every one of you who left kind words of praise in the comments section. Your kind words were greatly appreciated. And when we disagreed, it was typically done with kindness and respect.

I am not going away. We are just shuffling the deck a bit. I will be the reviewer on the new Superman/Wonder Woman book. I think it will be a great book. That is where the relationship between DC's two most powerful heroes will be explored further. I am expecting a good mix of characterization and action. I am expecting to see the supporting casts of both heroes prominently featured. I will enjoy reviewing that book, and then exchanging ideas with you in the comments section. I will see you there!

Art - 2: The artwork is dark and gloomy. I suppose that is the effect they were going for, but it was not to my liking.

We see Outsider and two of his Secret Society cronies, having just defeated the Justice League, who lay on the ground unconscious. This does not really have much of anything to do with the story inside, but it is nicely drawn.