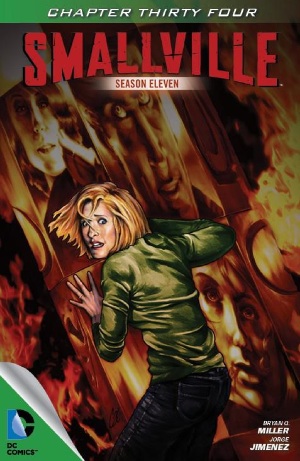 Click to enlarge
A few things have gone missing from the Lexcorp building, including Lex Luthor's "mind dive" device, security tapes and even the security guards. Tess reminds Lex he has himself tied down when he sleeps, so it couldn't have been her. Instantly, Lex thinks "Queen" before firing everybody and then telling them to find his machine as he walks away.

Switch to Earth-2, two years prior. Oliver is target practicing in the Watchtower while Chloe drinks whiskey on the couch. Oliver is dating Lois, says he plans to propose, and is obviously also very intimate with Chloe, who, for her part, is boozier and more sage about archery than he is.

Back on Earth-1, Chloe, soaking in a tub, is telling that to Oliver, who's sitting on the floor. He questions the story's/memory's romantic value, and they quickly move on to discussing Superman's and Impulse's progress in confronting the Black Racer.

Meanwhile, out in Utah, Superman and Jay Garrick discuss Bart's limited options for avoiding or defeating the Racer while Bart gazes out over the desert at the speed storm gathering in the distance. The theory is that the speed incidents are the result of the Racer trying to create a new speedster on which to feed (if he can't get Bart); people are dying because so few are built to handle it. Bart gets angry at Jay for not having confronted the Racer himself but Superman intervenes with a restraining hand on the shoulder at Bart's shouted "Coward!"

Just then, Chloe calls Superman from the Watchtower. There's a "category five" speed storm in Las Vegas; the body count is rising dramatically. Superman alerts Bart, who dashes off just quickly enough for Superman to catch him by the shoulder as he races by and then carry him back inside slung over his own shoulder. Superman then seems to give up, telling Watchtower that they have no ideas on how to handle the situation. Luckily, Emil Hamilton is now on the line with a "temporary solution" - namely, a special containment suit designed to augment Superman's speed so he can catch up with the Racer.

The suit is delivered in a rocket-propelled pod, shot across - well, Colorado, I guess - from S.T.A.R. Labs to the Utah desert. The suit is blue, and glows. Next thing you know, in Vegas, Superman Blue arrives for round two.

Story - 3: I don't know about you, but I don't generally think of heroes as people who use bribery and theft to get their way, which is why I'm having a bit of trouble of late with the Justice League I'm seeing in these pages - Oliver and Emil anyway. "Heroes," by the way, remember, was how they were referred to on the show, these folks, especially by Lois, and usually with urgency.

Does Superman know about the theft and bribery? Emil acknowledged it in Chapter 30 and promptly rationalized it (poorly, if I recall - and I do), but in worlds like this one where the line between good and evil is almost always clearly marked, rationalizations just aren't good enough. Superman, if he knew, would not be ok with it. So does he?

Meanwhile, where was the note that Oliver left for Lex in the room where the memory machines were kept, seen in Chapter 30? Did Lois take it? She was, I believe, the last person we saw seeing the room, the note with "To Lex XO" clearly written on it right there in the glow from the hallway lights, attached to the green arrow stuck in the floor. Why would Lois take it? It wasn't addressed to her. Did she think Oliver misspelled her name? Maybe "Tess" has it.

(Notice Lex looking over at Tess in that scene, too. Because that's the only way we can see her.)

Nor do I know exactly what to make of this new bit of information that Oliver-2 is cheating on Lois-2 with Chloe-2 - that is darker for these characters, I guess, which ("darkness") is obviously almost the entire and simple character of Earth-2 in contrast with -1 (right down to the hair color, somehow), even as it maybe tries to establish some kind of apparent timelessness to their relationship, some kind of attraction at the sub-atomic level or... something.

Is that important to the story at hand? Why is Chloe all of a sudden an archery expert? On both Earths, no less! And there she knows better than Oliver, despite his still having had the cruddy luck to be stranded on a desert island for five years where he became a master marksman. What's Chloe's excuse?

The fact is, Smallville's parallel earth conceit ultimately breaks down for me over Clark being the only one whose alternate identity has any real impact on the world but where even that impact is largely superficial and thus self-defeating of the symbolism.

The other characters, first of all, are nowhere as near their own opposites that the Clarks are. Lois still can't spell, and doesn't take crap from anyone. Oliver steals and bribes, apparently, in both universes (we don't know whether he-2 has killed, like he-1 has) and is a highly adept archer thanks structurally identical circumstances. They have the Watchtower and for the same purpose. Everything is pretty much fundamentally equivalent except Clark killed a whole schwack of people.

I get it that they're going for a "Clark literally changes everything" kind of deal where being raised by Lionel Luthor so alters Clark that Earth-2 is forever altered as well. (We don't know whether the two universes are supposed to have been otherwise identical right up until the moment of baby Kal-El's discovery, but let's assume they were, even if that doesn't account for why both Oliver and Chloe, very much blondes on Earth-1, both have dark hair on Earth-2.) That's the symbol they were pushing hardest on the show - that Clark is the light come to lead the people out of darkness.

Or into it, in the case of Clark Luthor.

But when everybody else is pretty much exactly the same - most of all that they still all band together to fight off the evildoers, in this case Ultraman, without need of Clark's light - you deflate the power of the symbol. Superman is either really awesome and amazing and a bright and shining force for good (Earth-1) or else the most insanely powerful and thus terrifying killer the world has ever known (Earth-2) but in neither case does he actually much influence or inspire people to be better than they are.

Dark reflections and all, those people are forever themselves. Kal-El is the one, apparently, who changes. Some symbol.

As for the rest of the issue, I guess I still don't know. Another special costume for Clark already? Rocket launched to him in the desert? A man who can move at super speed in a place where the only other people there can also move at super speed (well, maybe not Jay)? Where, in fact, given the augmentative properties of the suit especially, they probably lost time by shooting it there (not to mention the money wasted) instead of having Superman fly to the lab, even if that would have meant crossing Colorado twice to get back over to Nevada.