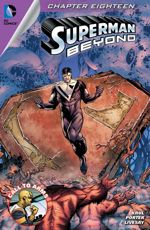 Click to enlarge
War! That's the one thing the Mangals and Trillians agree on: war must be waged and only one side must stand victorious in the ashes, thick with blood. Yet, for Superman this isn't the way it should be, not the way things must come to pass. Unfortunately, Superman's words are hollow to the vengeful Mangals, and he doesn't exactly stand on firm diplomatic ground with the Trillians. War is coming, and the Man of Steel is stuck in the middle.

The Trillians move first, attacking the Mangals in their afforested home. Superman takes an onslaught of firepower from the Trillian armada in an attempt to protect the Mangals. Likewise, Kal-El moves in on the Mangals, swooping in to block their counter fire. Superman's pleas to convince the Mangals to stand down are weak compared to Skirg's cry of "We will not be slaves again!"

Superman is failing at getting the enemies to see the wisdom in dialogue, and he's taking a beating protecting both sides from themselves. Luckily, Superman has some very powerful friends, and they've arrived just in time. Enter, Justice League Beyond.

Story - 4: Needless to say, Superman is my favorite comic book superhero, and I love it when he's heroic. I mean, really heroic. This issue gives us a wonderful view of the kind of heroism we've come to love and respect from the character. Supe's selflessness takes center stage in this issue, demonstrating just what makes him so remarkable.

Powerful, too, are the Mangals, and their determination to fight for absolute freedom. They are not antagonistic warmongers, but frightened former slaves who only wish to be rid of the persistent fear of being dragged back into that life of helotry. Their stance is understandable, and so sympathy bubbles around them.

The rest of the issue is pretty lean, but there's enough bulk piled on by Superman and Skirg that it doesn't quite matter. I'm predicting that the next issue will focus on the Trillians and President Epoq's maniacal plan to use his weapon of mass destruction. Now that the Justice League is part of the equation, we should hope for a blockbuster next issue.

Art - 2: HWhat can I say that I haven't already? Porter is still flopping around with his art. Once again there are times when the characters are rendered very well, mostly Superman, and other times when they're just part of the scenery rather than components of the story as it unfolds around them.