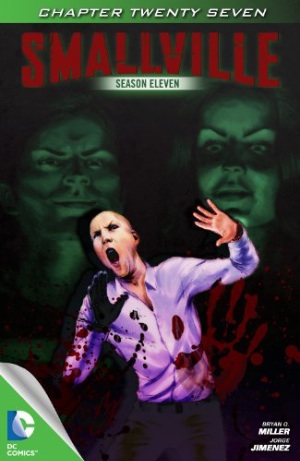 Click to enlarge
Lex visits Dr. "Psimon" Jones in his hyper-solitary prison cell and asks him to use his telepathic abilities to see whether Lex still even has his lost memories. The doctor, however, detecting Tess's presence and quietly taking her side, declines to help Lex, calling him an animal and a monster that will never atone for what he's done.

In Paris, where Watchtower sent them at the end of last issue, Superman and Impulse intervene against Monsieur Mallah and The Brain, who, along with a battalion of monkeys, are trying to make off with priceless paintings from The Louvre in order to finance the creation of their own state. The outward force of Superman's power clap makes short work of the monkeys, but not before Bart has a brief but close encounter with his version of a personal demon.

Story - 5: This one seemed to sort of, well, race by. Fitting, I think, given all the speed force being tapped (speed force, just to be clear, a term not as yet in use in Smallville). It's also the way all the high-action issues have played on me, just as they've tended to be the strongest efforts generally, across the board. Miller, in my opinion, is just nowhere nearly as strong at exposition and overall storytelling as he is at comparatively brief bursts of stuff like "Haunted, 3."

This includes, in the most specific sense, occasional turns of phrase and segments of dialogue: "mind dive," for instance, is an admittedly neat expression for the procedure they use to explore Lex's consciousness - my gripe in the relevant review ("Haunted, 1") wasn't about the tech but about the interplay of text and image to craft that tech, fake as Miller has admitted it is, into the story. Because the red door and the dark hallways are so central to the imagery of Lex's mind in those sequences, calling it a "dive" (a new addition, note - the show where this is introduced doesn't call it anything) is confusing. It's a mixed metaphor and, accordingly, just doesn't cohere, cool-sounding though it may be. I think the show got it right by not giving it a name at all.

In any case, this third "Haunted" chapter is a genuine romp, thoroughly enjoyable if not completely without distractions. I had to try not to think about Grodd, for instance, only because of the presence of a Flash-type character, which as far as I know haven't been all that prominent in stories featuring Monsieur Mallah and The Brain. But that kind of thing is rare here, and is the other reason the reading seemed to go so quickly - I wasn't getting repeatedly caught up puzzling over or just otherwise questioning odd little details.

With one big exception, which I'll get to.

The demon or whatever pursuing Bart comes off as a peculiar move into new territory for Smallville, but I expect we can attribute that more to the limitations of TV production budgets than anything else. It's also genuinely intriguing, but moreso for the fact of the new territory. I'm not into demons or anything, and in fact I hope the demon design is some kind of product of Bart's perception (e.g. inner demons) and not whatever it is actually looks like, if it even is anything to look like something at all. It's got me curious, though.

But here's my main quibble with this issue: since when can any incarnation of The Flash stop bullets with his hands? Since right here, I imagine. And it pulled me waayyy out. Have him match the bullet's speed and perform some kind of Aikido-like redirection of the bullet's energy and I'll play along but allow him to literally pluck them out of the air ("pluck" is the sound effect they use) and he's now a Superman who still can't fly. That's so Smallville! LOL.

I just... blech. Like the unprovoked and never again mentioned Bat-assault on Superman in "Detective," I can't wait to see what comes of this. (Barf. The pattern suggests it will never be mentioned, but then again I thought that's what would happen to Psimon.) Oh yeah, and I almost forgot: Supes can now also speak French! Incroyable! C'est fantastique, non? Non, c'est tellement stupide. Last week we learned he was fluent in Hindi. Prior to this, his linguistic abilities have been mentioned exactly once - in the first issue, where he can't yet speak Russian - and now they're back in an all-too-convenient and multilingual blaze of glory. Where has the man had time for this? We learned conclusively just last issue that it's only been a single month in Smallville time from the beginning of the season. Has he learned all of these languages in that time, or had he already learned French and/or Hindi in the six months between Seasons 10 and 11 and Russian was just really low on the list? It only matters because it's in here. What matters to me is that it's ham-fistedly deployed, in a way that faintly begs "Please don't think about this, just accept it." Oh, to be that person. Heh.

But that craziness aside, this was among the best outings Smallville has had this season and the very newness of the new year has me in a generous mood, so, top marks (because, really, 4.5 if half-marks were available).

Art - 5: Except for one instance, there's really no faulting the art this week, much like two weeks ago. Last week's fall-off, then, was hopefully just an anomaly. Or the pencils could switch hands next week and the matter will reset. Again. Well, whatever. The one problem I had this time around was the pair of panels in Dr. Jones' cell where the doctor detects Tess in Lex's mind. That itself is not the problem, it's that they show Jones looking at Tess as though she's in the room (he's looking to his right while Lex's speech balloon ["...is any of it still there?"] is coming more from his left, indicating he's looking to Lex's left, not at Lex), which we don't need him to do in order to know what's going on: us seeing her with her finger up to her lips in that classic quieting "Shh" gesture does most of the job; a flash of Lex's mind showing him and Tess visually overlapping (or something, I'm not spending a lot of time on this) in one of the dark hallways in sight of the red door would have more effectively done the rest (not least because it would have more fully dramatized what is actually supposed to be going on - Dr. Jones reading Lex's mind - just like they did in the opening frames of this arc). But otherwise the execution of the figure work etc. was great, so no ding on the grade.