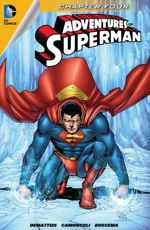 "The Bottle City of Metropolis"

Click to enlarge
It's pretty awesome being Superman. Helping people, crackin' some bad-guy-heads with buildings. Stellar stuff. But the Man of Steel's daily routine is interrupted by a mysterious stalker. The oddball even makes it into the Fortress of Solitude, but neither he nor Superman know how. Just the same, the stranger laments the feeling of being ordinary because of Superman's extraordinary feats. What's more, the stranger has a message to deliver, something to do with Kandor - if only he could remember what he had to say!

With the stranger's message undelivered, Superman takes to the skies to confront dozens of alien warships threatening Earth. Again and again, even though he tries with all his might, Superman cannot penetrate the shields surrounding the armada. Just as he's about to give up, Superman is consoled by the stranger: Superman's strength is remarkable. He is not ordinary! Superman realizes that so much of his strength comes from the very people he protects. Summoning his powers, the Man of Tomorrow bursts upward and slams into the otherworldly threat. And then...

...darkness. Superman must be aboard one of the ships. Revelations are disorienting, and it comes as a shock to Superman that he isn't Superman at all. He is, in fact, El Carter, the foremost authority on Superman - and apparently an amusement park aficionado. This is the year 2138, and Carter is testing his new Superman ride. It seems the miniature virtual reality ride has a glitch and a smidgen of Carter's consciousness seeped through. There are more bugs to work out, and it's only three weeks till opening day. Strap on your cape, Eli. You're heading back in.

Story - 1: Well, it took four issues for this series to deliver its first let down. And, egads, did it ever deliver. This could be the sloppiest, most inconsequential Superman story I've read in quite some time. Not since my time on New 52 Teen Titans have I been so unimpressed with a comic book I had to review. I'll have to admit right now that I've never really cared for DeMatteis's work. Since his work on "Emperor Joker", a story I rate highly as one of the worst Superman stories ever published, I've been underwhelmed by his writing, which I find convoluted and seemingly nongregarious.

There is a lot of early build-up in this story, which gets roughed up by panel redundancy, and ultimately abandoned by mundanity. The amusement park angle itself isn't wholly risible, but the weighty syntax that delivers it feels nothing short of contemptible. Mark Waid once said, "An idea isn't a story." Damn straight. All we got from "The Bottle City of Metropolis" was an idea, and a scant glimpse at a story. The wasted panels on Superman's efforts against the warships is particularly frustrating. It smacks of filler in the wake of not having enough story to fill up the issue.

It's impractical, I believe, to anticipate or expect brilliance again and again from the comic books we read. I don't demand the incredible product of a writer's lucubration from month to month, but I do, in the very least, hope to be entertained. This issue, unfortunately, is worth only the stamp it was mailed in on. What's more, it may not be fair or appropriate to compare issues of Adventures of Superman with one another. The title is out-of-continuity, after all; however, I can't help but feel even more dissatisfied with this issue when I reread the previous three, especially issue #2, which, if I were a spiritual man, would ceremoniously place in a sacred luculus atop lofty, gelid Himalayan peaks. Issue #4, however, I'll be just as content to duck it in the back of a hymn book.

Art - 3: The art was decent enough. It doesn't make epic strides or follies. It hits all the right notes when it has to, although it's overall delivery is marred by the numbing repetition on pages 13 and 14 (digital edition). The most positive thing about the art is Camuncoli's work on Superman's cape. He has a handle on the flowing nature of the cape and it looks very regal, organic even, in most of the art.

Cover Art - 3: There's nothing much to write home about here. Again Camuncoli did a crackin' job on Superman's cape.