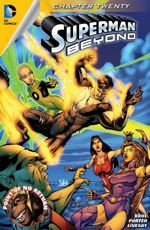 "Point of No Return"

Click to enlarge
The war between the Trillians and the Mangals is creeping closer to utter annihilation. Epoq's bomb is counting down and the Justice League can't defuse it. The Mangals aren't willing to give up. All this leaves Superman stuck for options.

Tyro's vocal reservations with the sour turn of recent events drive Epoq to attempted murder as the maniacal president tosses Tyro from the warship. Saved by Superman, Tyro, the bomb's designer, rushes to defuse it. Meanwhile, Epoq is served a gruesome comeuppance at the hands of Skirg.

With the bomb defused and Epoq dead, the Trillians are at a loss. Superman stands before the Trillians and Mangals, pleading with them to stop the war and learn to live together. Tyro says his people will now work towards peaceful coexistence, and the Mangals agree.

Peace on Trillia is finally achieved, and Superman and the Justice League soar off into space, onto the next adventure.

Story - 2: Ultimately, I suppose, this issue on its own wasn't as bad as to deserve a 2, but it took so long for us to get to the resolution of this story that I'm annoyed by the anti-climax. The end of the war happened so easily that it should have happened three issues ago.

Now that the arc is finished, I can look back at the first few issues with some irksomeness, too. There were some fine character beats early on showcasing Kal Kent's experiences working at the fire station. A little return to that would have been nice here at the end. Instead with get Firestar being saucy.

This arc had some of the brightest moments of all currently published Superman comic books. I've defended this title continuously, lamenting any limited popularity, encouraging a stronger readership. With the end of this arc I can fully understand anyone's disinterest. It was boring. Krul handled this story like silly putty, initially molding it into a deeply character-driven social commentary, only to eventually pull it so thin that it lost color and substance.

I'd score the entire arc a 3 out of 5. While the entertainment value and strong characterizations early on made Superman Beyond one of the best comic books in DC's publications, the dropping of the ball in the last quarter of the arc did some hefty damage to the overall story.