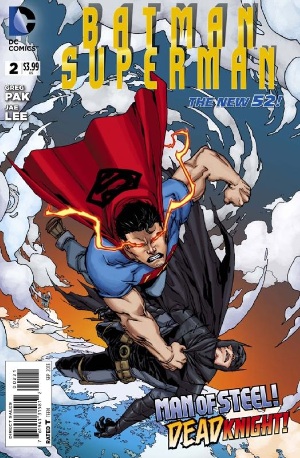 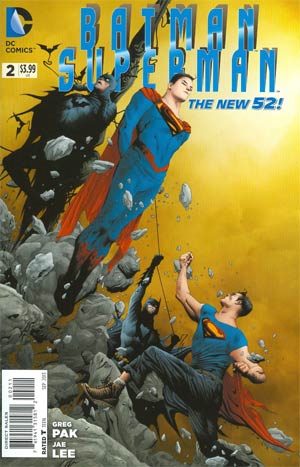 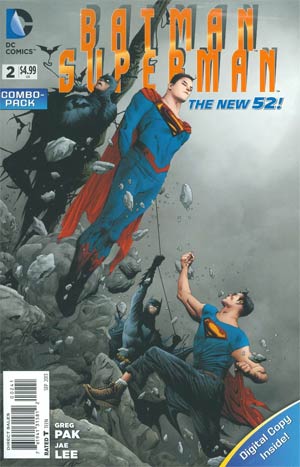 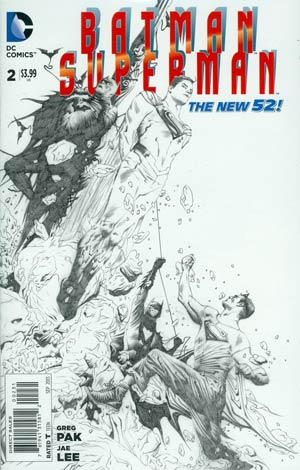 Flashing back to last issue, Kaiyo, aka the Trickster, shows Batman and Superman being teleported from Metropolis to Earth-2.

In the Gotham Heights of Earth-2, Batman appears and heads directly for the Batcave. Upon entering the Batcave, he meets up with Catwoman, who he had just fought earlier that night. Batman attacks Catwoman, who seems to know all of his moves. Being moved into another room, Batman spots a wedding photo; a wedding photo of Bruce Wayne and Selina Kyle.

Back in Earth-2's Smallville, Superman is being scolded by Jonathan Kent, who claims that he is not his son and that his son would never beat his best-friend, referring to Earth-2 Batman, senseless. Superman, not understanding what is going on, speeds over to Batman to interrogate him once more. Batman, now beginning to understand what's going on, teleports away just in time for the Earth-2 Superman to show up.

In the Earth-2 Batcave, Earth-2 Batman returns to see that Batman has tied up Catwoman, his wife. The Batmen proceed to fight each other until Earth-2 Batman begins to ask some questions. Realizing they're the same person, they form an alliance. Batman tells his counterpart about Superman and Earth-2 Batman responds saying that he has a friend taking care of it.

In Smallville, the Supermen tussle, that is until Earth-2 Martha Kent realizes that Superman is also her boy and gets through to him by being his mother, a mother who he had lost only recently. As the Batmen fly through Gotham, a much cleaner Gotham, the Supermen fly through to Metropolis to meet Earth-2 Superman's wife, Lois Lane. Earth-2 Wonder Woman shows up and lunges upon Lois, taking her down to the ground and revealing that she's being possessed by none-other than the Trickster.

Story - 4: I really am enjoying Batman/Superman. With news that a "World's Finest" film that will sequel Man of Steel and bring a new beginning to Batman, how can I not? Honestly, this issue was just as fun and intriguing as the last. I'm very interested in what and who this Trickster is, and why she is after two versions of the World's Finest superheroes.

I think my favorite scene in this issue was definitely when Earth-2 Martha Kent went to comfort Superman. She got through to him in a way that only a mother would. It almost broke my heart to remember that Superman's parents are dead in the New 52 and it also gives a good reason as to why Superman has maybe been more aggressive or even violent in his New 52 career. He not only doesn't really have a Lois Lane to ground him, but he also doesn't have a Ma and/or Pa Kent to either. Earth-2 Superman, who in Earth-2 #1 gave his life for his universe, had both of these things, and had a great life, wife, and family. New 52 Superman's family (including Kon-El and Kara) is broken. Not only that, but he's also not together with Lois Lane, he's with Wonder Woman, someone who is also more violent and aggressive. Ultimately, the interaction and contrast between these two versions of the New 52 Superman show just how flawed this Superman is, just like every other Superman has been. It's interesting to say the least.

Now, I know this is the SUPERMAN Homepage, but like I said in my last review I like Batman and Superman equally, and in a book called Batman/Superman, I must treat them equally as well. That being said, I loved the contrast between the Batmen in this book. Earth-2 Batman, much like Earth-2 Superman, is married, has a family, and has moved on from his parent's death, something the regular New 52 Batman didn't even do until recently in the first arc of Batman & Robin entitled "Born to Kill". Earth-2 Batman has also made Gotham better and cleaner, not only as Batman but as Bruce Wayne. New 52 Batman has just recently started to do that with the "Court of Owls" story arc in the Batman book. It's very interesting how different Batman AND Superman are not only from their Earth-2 doppelgängers, but also from their future selves 5 years from the time of this book. After Justice League "Origin", after those long 5 years of struggles, after even their most recent arcs like "Death of the Family" and "H'El on Earth".

What I really liked about this issue is how Batman and Superman both dealt with being on Earth-2. It wasn't like they were completely accepting of their counterparts, they attacked them. I also liked seeing the Kents, Catwoman, and Lois Lane in this issue, but one character I did NOT like seeing in this book was Wonder Woman, Earth-2 or not. I feel that DC Comics is trying WAY too hard to make Superman and Wonder Woman logical and apart of each other's respective "families". I really hope that Trinity War separates them for good and not only shows that they are not compatible, but that they are not right for each other either. However, due to the upcoming Superman/Wonder Woman book, I highly doubt that. Hopefully it'll be cancelled as Batman/Superman makes much more sense. A new Trinity book however could be good, but Superman and Wonder Woman do not need their own book.

Over-all, very good chapter, fun, exciting, and a good continuation of this arc. I look forward to next month's issue 3 and I hope that it also lives up to the first issue.

Art - 4: The art was much better this issue. I still felt that the art was a little... uneasy, but who am I to judge? One of my favorite panels in this book is when Earth-2 Superman first shows up with his fist in the ground telling Superman to get away from his parents. That was very cool!

Cover Art - 4: Straight 4's for this whole book. I liked the cover art, it was interesting. My one question/complaint is that wouldn't it have looked better with Earth-2 Batman AND Earth-2 Superman on the bottom fighting their New 52 counterparts? Maybe I'm not completely understanding the image, but it looks like Earth-2 Batman and Superman are fighting Earth-2 Superman and Batman, but I could be mistaken. Still, got me pumped for the book!