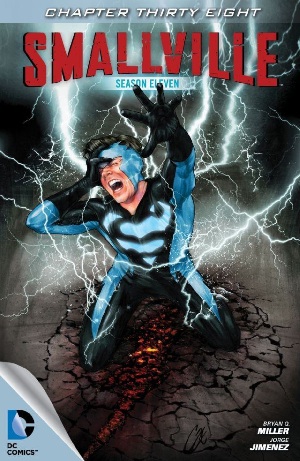 Click to enlarge
On Earth 2, in Chloe's memory, Oliver has called a press conference to reveal that Ultraman is really Clark Luthor and to announce that Queen Industries is going to provide every citizen of Metropolis with a personal amount of "meteor rock" with which to defend themselves from the villain. Meanwhile, Chloe-2 is waiting with a sniper rifle and a Kryptonite bullet with which to shoot Ultraman, whose appearance on the scene is fully expected. And appear he does, fully aware that it's a trap, and snapping Oliver's neck when Chloe fails to shoot for apparent fear of hitting Oliver.

On Earth 1, Chloe sheds a tear from the flashback and doesn't want to talk about it with Oliver. She's too busy tracking Bart, who is running faster than he's ever run before, around and around the world, gathering up the speed from every speed force outbreak. At one point, he seems to have some speedster companions who want to talk with him, but they are not identified.

Meanwhile, in Las Vegas, Superman continues to fight the Black Racer, who seems to be gaining the upper hand just as Bart arrives, prepared at last for the final showdown and his reckoning with the speed force.

Story - 2: This was a whole lot of great art but not so much "story." The latest Chloe flashback tells us almost nothing (and probably truly nothing of value, insofar as it might contain a clue to wherever all of this business is leading), and since the entirety of Earth-2 (including Oliver) is "gone," the fact that Ultraman/Clark Luthor killed Oliver-2 in public means nothing to me. Until we know for sure whether the mental merger of the two Chloes is going to have any lasting story consequences (never mind symbolic profundity), I'll continue to see it as random fluff - included to remind us about some of the strongest later moments on the show (of which Miller should be rightly proud, though not preeningly so, as I fear some of this might be) and probably to prepare us for Clark Luthor's eventual return, but serving little utility in the "here and now."

Beyond that, there's the hint that we might get more speedster cameos in chapters 11 and/or 12, a sequence showing Superman's ongoing fight with the Black Racer that looks pretty but doesn't advance the story in any way at all, and lots of cool scenes of Bart running, discussion of which I should really save for below. I could nitpick on lots of little things but, really, even with two weeks off during the wrap-up of "Effigy" (thanks again to Michael J. Petty for taking those on) I can't imagine anyone cares to hear it.

It all adds up to me using a combination of words I never thought I would use to describe, well, anything: Breathtaking but boring. Or put it in the words of the all-powerful Yogurt: "[Smallville], the Coloring Book!"

Art - 5: Really, seriously, excellently good work. The composition of the several pages of Bart running around the world is very, very strong, and the tie-backs to the international locations we've already visited in this arc were good... well, good storytelling, in all honesty (though not so good that they warrant giving the story a higher score or including discussion of it in the review's story section - it's table stakes, really). I would pay good money for this art, and I guess the fact that I already did means I don't feel as silly paying good money for the non-existent story, "where the real money from the movie is made!"

Cover Art - 3: This is one of those covers that irritate me for showing me something that I will not be able to find once I open that cover and look inside. Compositionally, it's fine, even if Blue Supes doesn't much look like Tom Welling, whose likeness we know Cat Staggs is perfectly capable of capturing. Presumably, as seems to be the case with these rotating digital covers, the image will be most relevant to the second of the three issues for which the cover will be used. I do not have any idea whether this tendency of the digital first titles is intentional or what (nor can I begin to imagine what function it would be deemed to have if it is intentional), but I do know it irritates me, first for not being representative of the story in the present (for the first week, anyway) and second for effectively spoiling (probably) what's still to come. I do appreciate that Superman, rather than Bart, is the focus, but something tells me it won't amount to much of lasting consequence.