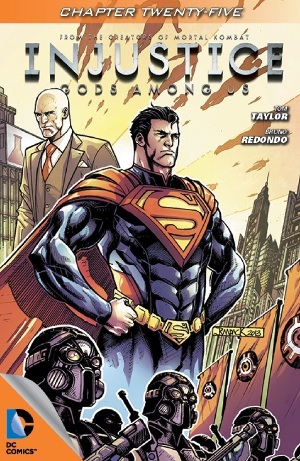 Injustice: Gods Among Us - Chapter #25

Click to enlarge
The people of the world celebrate and chant Superman's name, after he single-handedly repulsed the Apokolips invasion. Wonder Woman comments that Superman saved so many lives, while Batman states the converse. Superman believes that too many lives were lost altogether. Superman believes that the League needs allies with capabilities like he and Wonder Woman. Lex agrees and states that while there are none now, there will be. Batman sits at the head of his Insurgency, and debates Superman's actions. The Huntress challenges his notion that Superman was wrong in what he did. Huntress mistakenly calls Batman, "Bruce", outing him before the others. She then decides to leave, not believing that Superman is in error for his actions, but Batman tells her that Superman is working on something. In order to quell Huntress' accusations, Batman removes his mask and reveals his true identity. An alert moves the scene to action as "cultists", worshippers of Superman, are on the move dealing justice as they see fit. The Insurgency tries to stop the cultists, but when the League arrives, it becomes a standoff between the two groups. The Insurgency leaves with the League looking on as they do.

Story - 2: One step forward, two steps backwards. It's hard not to feel for Taylor and the Möbius strip he's crafted for himself to deal with. He's all ready answered his own thesis, but there's still more story to tell. Why? It would be satisfying to say that the story has to tie in with the game's release, but that day has come and gone. The first thing anyone reading this should probably question is: "What are they doing on Earth?" The League was just attacked by Apokolips. Superman repelled the invasion, but that's not enough. Not in this world. He needs to find Mister Miracle, get a boom tube, and head for Apokolips to finish the job. If not, there's just the threat that Darkseid and Kalibak will attack again. That's the real world response. Repel enemy then hunt them down so they can't attack anew. Occupy their territory and keep them under thumb to be certain they will never be a threat again. It's not that Superman is being remiss about things; it's just that the last vestiges of his being a superhero haven't been eradicated. Heroes protect and defend, they don't attack and occupy.

The next question is for Batman: "What else was Superman supposed to do?" Batman is the antithesis, but he offers no solution other than to glower and give trite conventions with his character that have grown more than cliché. He's right because he's Batman. That seems to be enough. It was one thing when Batman objected to Superman killing the Joker. However, the breakout at Arkham proved Superman's thesis correct, at Dick Grayson's expense. The invasion from Apokolips reinforced that thesis. There is counterargument on Batman's part; the antithesis is flaccid. We're left with the realization that it's wrong to take over the world, but killing is just fine. That's the end result. If Batman cannot verbalize a response to Superman for the reader, if the story just descends into a brawl, then that's what were left with. Kill the bad guys, eradicate the problem, but just don't take over the world. The trouble is that we learned a long time ago the quandary with killing: it begets more of the same. Killing involves power, as only the one with the ability to do so can, and I won't bore you with the old power and corruption adage. If Batman were to take down Superman now, at the height of his popularity and influence, that would be something. Batman has the foresight to know that Superman's aspirations cannot end well, but it won't be until those plans are in effect and weighing down the world that he'll actually do something. It's all so backwards that it robs the weight of last issue, where Superman makes the "hard" choice, but Batman won't make the "harder" choice and take out Superman. He'll conveniently wait until it's too late, and then get Superman from another dimension to get help. 10 steps ahead that one.

On a side note, if you've played the game, you know what becomes of the evil Superman after he battles the good Superman. If not, don't read further or risk being spoiled. The good Superman defeats the evil Superman and imprisons him under red sunlight lamps. This result conflicts with Taylor's thesis even more because the last scene shows us that the evil Superman is destined to break loose. Why don't they just get rid of him? He's become the exact problem that he composed his regime to deal with, so why is he allowed to live, especially since there is no one who can deal with him except a Superman from another dimension? This is the question Taylor, through Batman, needs to answer and answer definitively, because without that solution, what is the purpose of this story other than to set-up a showdown between Superman and Batman that never happens?

Art - 3: Please bring back Derenick. Comics are still a visual medium and the visuals here are... medium. It helps to have art that is a wee more lively to pass the time while the plot meanders.

Cover Art - 4: Lex and Superman again. Both looking sinister with flying beings in the background. Intriguing without being redundant