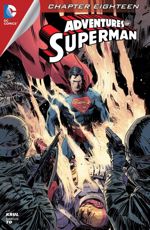 Click to enlarge
After the missile attack launched on them by General Sam Lane, Superman and Mongul lie in the resultant crater. Lane appears as a hologram and rejects Superman's insistence that Superman is on his side. The military opens fire, leaving Superman no choice but to flee, carting Mongul, presently out cold, along with him.

In the Fortress of Solitude, Superman comes under scrutiny from Zod's apparition for his decision to imprison Mongul. Sending out a signal to attract a Green Lantern, Hal Jordan and Superman finally cross paths. After brief salutations, Jordan agrees to take Mongul to Oa, where the criminal will be imprisoned in the Science-Cells. Jordan wishes to thank the Man of Steel, but it turns out that Superman isn't Superman yet, at least not by name. For Kal-El, "friend" is a good enough moniker.

Thousands of kilometers south in Smallville, Superman returns home after months away. After a good heart-to-heart with Pa on the farm, Clark Kent realizes what he needs to do...

Metropolis. The Daily Planet. Clark expresses, excessively, his gratitude to Perry White for the chance to work at the newspaper. He meets Jimmy Olsen, and maybe more importantly, ace reporter Lois Lane, who gives Clark a pointer on where to find good stories: just look up. The news world is abuzz with sightings of this phenomenal do-gooder. Clark's take: he's just a man doing what he can to make a difference. Lois sees it differently. This hero is more than just that. He is, as Lois dubs him, a Superman.

Story - 3: This entire arc was saved by the final act of this issue. There is plenty of heart in the last few panels, with Pa and the gang at the Daily Planet. The build up to that, however, right from part one, didn't do the ending justice. So, Mongul was taken out by a missile. Mongul, the scourge who has "defeated empires in countless galaxies" was KOed by a simple Earth weapon. It didn't kill him, true, but it put him out of commission long enough for Superman to conveniently shackle him up in the Fortress. I would have preferred a more dramatic conclusion to their fight, and I think the story, and Mongul as a character deserved it.

The signal to Hal Jordan was a little odd. Worse, we don't actually get to see it. What did it look like? Was it shaped like a lantern? Why would Superman send out a beacon over the Fortress? He may as well put up a giant "Secret Lair. Keep out! This means you!" sign over the whole building. And why is it that Superman has met other Green Lanterns before he's met the Lantern of space sector 2814? This whole scene would have made more sense if Superman and Hal Jordan were already acquainted.

All that aside, my biggest problem with this whole story is Zod. What was the whole point of Zod's appearance? What was he? A malfunction in the Fortress's crystals? A test from Jor-El? A ghost, as Superman ponders? Just like Jor-El's supposed closet-skeleton's from part two, we're let down, this time by inexplicability rather than anemic obloguy. No, I'm sorry, this just isn't good enough.

Art - 4: The art got better with each part of this story. I found Herring's colors an exceptional compliment to To's pencils. Each character is rendered exquisitely, particularly Lois, who just may be the cutest version I've ever seen.