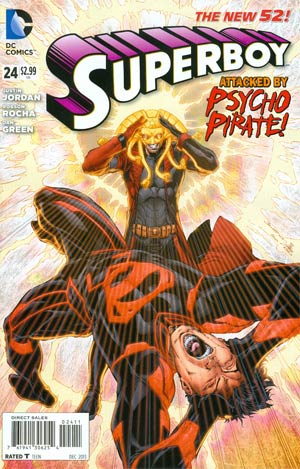 Click to enlarge
Superboy is face to face with Psycho Pirate.

Immediately he can feel a psychic influence and warns Eliza to run out of McDuffie High.

Psycho Pirate tries to explain himself while calming Superboy's rage. He makes a mockery of Superboy's names, Kon and Conner, musing that it was Dr. Psycho making a mockery of him.

Superboy quickly realizes that Pirate can influence emotion and the visitor explains he is not even there, in fact he is one of two psychic projections speaking to the two Super males simultaneously. An unimpressed Superboy explains his emotion to beat up Pirate may be dampened but his desire is unaffected.

Offering the hand of open honesty Pirate is about to explain his motivation before Dr. Psycho attacks him. Both Psycho's call the other a liar when they implicate the other as a villain. Pirate then creates a projection in the Mindscape from Dr. Psycho's mind and it shows a small wooden cabin surrounded a river of pure energy.

Pirate explains that his height challenged opponent has secretly been feeding off Superboy's energy becoming stronger and stronger with each passing day. He then reveals Dr. Psycho's origins... that he was a highly intelligent boy, one that was bullied for it, until H.I.V.E stepped in and erased him from memory and physical records.

They then moved the boy, Edgar, to their test facility and began testing. The better subjects were trained up for the cause as warriors, but the failures, like Edgar were kept as 'psychic batteries' to feed the warriors. They underestimated Edgar and he used a fellow patient, Claire, and her inner beast (Superboy #21) to escape.

When Dr. Psycho found Superboy he was able to unlock all his secrets and decided to use that to power himself up. Using Superboy to complete his personal goal of destroying H.I.V.E. Pirate also reveals that the living weapon stories he was told about himself were lies and that he was only a living organ donor.

Pirate also reveals that minutes before their encounter a secret organization offered to induct him with a special coin when he was ready. Dr. Psycho he points out wasn't lying about H.I.V.E, they are evil, preparing humans to be vessels for Coluan minds when their master returns from space but they need psychics to do it and Pirate has been hiding their existence. That's why Pirate wants the hunt Superboy is on to stop if he reveals the psychics it will only aid Brainiac's cause.

Superboy refuses to listen to the two of them after realizing Dr. Psycho knew all his secrets and never revealed them to him. With psy-amplified rage Superboy attacks his former ally and returns them to the earthly plane.

The two fight, with Dr. Psycho projecting himself into a giant muscle man to compete. Superboy and Dr. Psycho are both still linked and Superboy realizes that Pirate has wiped knowledge of Kon's origins and transferred it to himself so he has a hold over the teen.

When he next wakes up in a red prison cell he discovers his TTK has been drained away and he is tended to by Krypto. A smirking Psycho Pirate enters, calms a growling Krypto and kicks Superboy in the face.

To Be Continued... In Teen Titans and Forever Evil #2.

Story - 3: What's with Superboy being manipulated ALL the time? Can any writer ever just make him a whole person and have proper adventures like his past incarnations? Super powered Pinocchio is not really why I buy this book and I'm pretty sure many would agree. That said it was good to find out Dr. Psycho's origin as he was a character that has been quite prominent in the past few months. The explanation for Psycho Pirate's dual appearance is palatable but just a little forethought would have negated it.

Justin Jordan is doing a decent job of pulling mis-written story threads together but sadly because of the point of time he's come in he's not able to tell a truly decent story. 'Which villain is lying?' would be ok if this was the first time but we've had, Caitlin, Rose, Harvest, Jocelyn, Claire, Supergirl, H'El, Lex Luthor, Dr. Psycho and now Psycho Pirate all feeding him lines of truth and lies since issue #0 so maybe its time that the book just went with old fashioned Superheroics? the book did try at one point with Superboy's socialite landlady but that thread has been dumped now...

I like Psycho Pirate, despite the dumb mask! His machinations bode for a very capable villain! It's a shame he's wasted here in a Psycho versus Psycho face off as the seed sown for his character would make for a much better appearance in a better story. I was beginning to like Dr. Psycho too as he and Krypto had become the only supporting cast that has stuck around. Now that "Return to Krypton" story starts next issue, am I forced to read the end of this arc in tie-ins? To see how it all ends? Pah :(

Art - 3: The artwork is pretty good if a bit scribbly on occasion. The inks would benefit from being a bit heavier to add some depth as the coloring alone isn't strong enough to liven it up.

Cover Art - 3: A cool cover that would have made for a nice 3D issue had it been a "Villain's Month" offering, but as a regular cover it just rinses and repeats the theme New 52 Superboy readers are all too familiar with... Kon getting the snot kicked out of him.