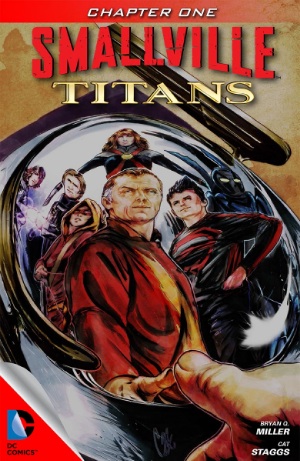 Click to enlarge
In San Francisco, a villain by the name of Doc Phosphorus escaped from Alcatraz and proceeded to terrorize a carnival. Just then, Conner Kent aka Superboy comes seemingly out of nowhere and punches Phosphorus in the face.

Blasting the Ferris Wheel in an attempt to get the Boy of Steel off his back, Phosphorus tries to run until several other teenagers with powers enter the scene - Mia Dearden aka Speedy, M'gann M'orzz aka Miss Martian, Jamie Reyes aka Blue Beetle, and Zan & Jayna aka the Wonder Twins!

Fighting their foe, the group each take their turn at the villain while Superboy catches the wheel. That is until Phosphorus sends flaming pieces of wood at Miss Martian. But before Superboy can get to her, she is quickly removed from the scene in a flash by the kid's mentor: Jay Garrick aka The Flash of the Justice Society of America.

Immediately after Blue Beetle and Speedy send Phosphorus into the water, the Flash tells them that they failed their mission explaining that they should have first put out the fires and then sent Phosphorus directly into the water instead of fighting him first.

Elsewhere as Phosphorus is being fished out of the ocean, it is revealed that Rose Wilson set the entire ordeal up just to see how the group of teenage heroes would respond.

Story - 4: I'll admit, I wasn't too thrilled that this was going to be the first mini-series story. I would have much rather them finished "Olympus" and then started up "Alien" and "Titans" simultaneously; or just have made "Titans" the final Season 11 Special. DC is really weird sometimes...

But quite honestly, I was pleasantly surprised at how much I really did enjoy this story, and here I believe is the reason. BQM is appealing to many different fandoms here with this story, many of which I am a part of, the first of these fandoms being Smallville fans. I'm a die-hard Smallville fan (for those who didn't know) and I've loved the idea of the Season 11 books since they were first announced. That being said I don't think the idea has been executed all too well and I really haven't fully enjoyed a story since either "Haunted" or "Ago". "Titans" I like because it feels like it takes place in the Smallville universe, while at the same time being part of the Expanded Universe that is Season 11. Get my drift?

The second fandom this appeals to is Teen Titans fans, but not just any team of Titans, specifically the people who read the most recent Teen Titans series (issues #1-100) from BEFORE the New 52. That team of Titans consisted of all of these characters (minus the Wonder Twins of course) at one time or another and they were all mentored by older Titans/heroes who had come before them, including Cyborg, Raven, Nightwing, The Flash (Wally West), and members of both the JLA and JSA. On top of that, the team was based in San Francisco!

Finally, the third fandom that this story really appeals to is fans of the Young Justice cartoon series that aired on Cartoon Network's DC Nation block until earlier this year (the series was renamed Young Justice: Invasion in its second season). Honestly, it just feels like a Young Justice story! An enemy that has ties to the enemies of the heroes mentors (in this case the Superman/Slade nemesis being played out now by Rose Wilson), a mentor that looks over the flawed team of heroes (Jay Garrick/Flash), a bunch of "sidekicks", and of course the fact that three members of this team were main cast members on Young Justice (Superboy & Miss Martian for seasons one and two and Blue Beetle just during season two)!

These connections to live action television, comic book epics, and of course beloved cartoon series' make this book all the better. I love Connor's new Superboy outfit (a combo of his New 52 look and Clark's Season 10 Blur uniform), although I miss the T-shirt/jeans look. I really like the new dynamic that BQM brings to the Wonder Twins. They don't do much here, but they have a LOT of potential. I am very glad to see Mia Dearden's Speedy again as she's not in the New 52 and I've been begging for her to reappear since her second episode ("Disciple") in Season 9. Miss Martian is nice to have on the team because of her abilities (they'll come in handy sooner-than-later) and I like her seeming relationship with Superboy (another Young Justice reference). Blue Beetle was also a good one to add in here. I liked his brief interaction with Booster Gold in "Argo" (and of course in "Booster") and I'm glad to see Jamie pursuing the heroic lifestyle.

Now, I wasn't too fond of Jay Garrick in this issue, he was waaay to much a "grumpy, old man" for my tastes. I hope that gets better. I also have to say that Connor high-fiveing M'gann in the middle of battle was a little much, and "Darn Tootin'"... Really?

I'm interested to see how/why Rose Wilson connects with this group of Teen Titans and if she will end up joining them or not, and I just really look forward to this interpretation of Superboy, the Titans, and just another chapter in the Post-"Finale" universe!

Art - 3: Solid over-all. There were times where I didn't even know what people were running from or what was actually taking place in a scene, which is sad, but over-all not too shabby!

Cover Art - 5: I REALLY like this cover art! The Teen Titans (and their mentor) are very prominent and I like the heroic stance we see in the reflection of Jay's Flash helmet. Very cool!