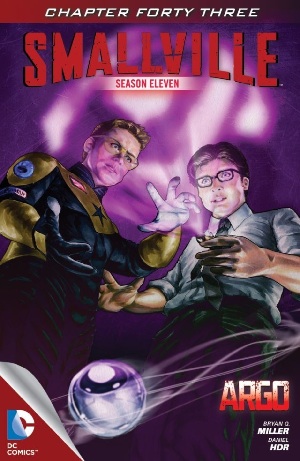 Click to enlarge
A young boy named Billy spots a lonely Skeets on the streets of Metropolis and his mother, misunderstanding, is aghast at the word he just used. Skeets sees himself in a fireman's Dalmatian and misses Booster. So he hover-wanders aimlessly until he has an idea.

At Watchtower, Digital Tess is at a loss. Skeets has informed her of his situation but she says she doesn't know how she's supposed to help. That's when he tells her what he really needs is money, so much money that not even good friend Ted Kord can help - he needs to purchase land with a thousand-year lease.

Cut to Clark and Booster in the 31st Century. Booster says he's jealous of the statue, and Clark asks him how he was able to get a Legion ring in the first place, being that he is from the 25th Century. Suddenly, Skeets appears, shouting "Sirs! Sirs! Sirs!" He tells them he had been waiting in a time capsule in that very spot for 1,000 years because he didn't want to let Booster down, to which Booster replies that he gets along fine on his own.

Clark is now getting confused and wonders aloud where, if the ring is recalling Legionnaires, the Legion is. But Booster recognizes they've got more immediate problems, like the enflamed spaceship crashing down on top of them. Clark, breaking the buttons off his shirt, tells Booster to get the civilians clear - since he's never done it before, he's not entirely sure how he's going to fare catching a spaceship. And off goes Superman.

Meanwhile, aboard that very ship, Lightning Lad and Brainiac 5 are trying to escape from agents of Earthgov. Lightning Lad is eager to "fry" them but Brainiac insists on following Legion charters - stunning only. Lightning Lad is ambivalent about the Legion having rehabilitated Brainiac and suggests he go "make nice" with the ship's navigation system, with which Brainiac had earlier "gotten fresh." That's when they see the incoming blur, which Lightning Lad mistakes for a missile. But not Brainiac.

Superman catches the ship, but Booster's efforts to evacuate the area meet resistance from a few people who question whether Booster is even human. Until they see the ship nearly on top of them. Then they run.

Safely on the ground, Superman asks aloud for somebody to remind him to tell Oliver about this one as Lightning Lad and Brainiac come up and greet him. They ask him what he's doing in the future and he says he was hoping they could tell him. Just as they're clarifying the circumstances of their involvement with the crashing spaceship, a group of armed and masked men arrives and commands them all to submit themselves to custody. Superman asks whether the Legion is at war with Earth, to which Brainiac responds that it's not quite that simple.

Earth is at war with the new planet in the solar system.

Story - 4: There is at least one problem with telling a time travel story in the middle of a broader, season-long arc wherein the very existence of the multi-verse is supposedly in dire and relatively immediate jeopardy - in this case, sending our hero to the distant future more or less completely undercuts the peril implicit in the "Crisis."

Of course, we all know that Superman and friends will save the day, but as a reader I'd prefer that that was not made palpably clear in ways like this.

That said, I enjoy a good time travel story - hell, I enjoy not-so-good time travel stories provided certain elements are done well. The first Timecop movie, for instance? I've watched that thing so many times it should probably be embarrassing. Same for the third Back to the Future, objectively the worst of the bunch.

We're not yet far enough along in this particular time travel story for me to be able to look at it as one, but I'm keeping an open mind. We'll get there.

The inclusion of a New Krypton, meanwhile, while coming out of pretty much nowhere intra-narratively, is intriguing. The Smallville storytelling path is more or less obvious, though - Clark will get excited at the prospect of meeting other Kryptonians; will talk/think about not being alone anymore; and will struggle with, but ultimately overcome, an impulse to stay - so I am looking forward to being pleasantly surprised when, instead, this matured Clark either won't have any of those old longings and doubts or, if he does, puts them easily aside.

We'll get there, too. For now, and breaking from the pattern I tried to establish last week of ebullient praise and commendation, I feel I have to gripe about Digital Tess. I can't just "go with it." Tess was a major, if sometimes confounding, character on the show. Evidently, she was also popular, if the contortions we've now gone through to get her back in some form are any indication. But are there any good story reasons to bring her back? Is there anything, in a word, indispensable about Tess Mercer? I can't think of anything. But that doesn't even really matter. She's back in an appropriately sci-fi comic booky way. I'm engaged a little more with how they're doing this same basic thing over in Superior Spider-Man, but just barely. So, ok, I'm officially accepting the raw fact of her return right here and now.

Much like they did when she was "trapped... trapped in the mind of one Lex Luthor," they have taken the easy route to expressing the impact of Tess's virtual presence on the real world. When she was in Lex's head, Lex still for some reason was always shown to be looking at her, as though she really was standing there behind him or wherever. Here, we see her physically manipulating virtual displays when, really, shouldn't they be in her head, if you know what I mean? She's basically a part of the computer system now, right? Does Digital Tess really need her digital digits and eyes to navigate her new environment? Probably not, but that's what they're showing us. It makes sense to show her doing super-hero research stuff rather than just sitting around crying or something (since we know she has digital tear ducts), but I think the effort to be simple about it only makes it more complicated.

I'm not saying having her just stand there with her hands at her side and speaking in some kind of monotone would be preferable, but extend the boundaries of her hologram projection space (would that push the conceit too far?) and she could walk around Watchtower and activate the various monitors that are already there, all without ever having to interact physically with anything but not losing anything important from her character, either (other than the corporeal form). Maybe they'll get to that.

I can, however, "just go" with Miller's tribute to Douglas Adams' Hitchhiker's Guide to the Galaxy by having Skeets park himself in the same spot for a thousand years waiting to catch up to Booster and Clark (as Marvin sort of did in Hitchhiker's, though for rather longer than that - if memory serves, from the time they leave him on Magrathea until the end of the universe [so, millennia], when/where they find him at Milliways). In fact, I'm downright tickled with this little morsel. Digital watches and hats alike off to you, Mr. Miller. (Uh, assuming it's intentional? I choose to think it is.)

So let's leave on that high note, shall we, and, above all else, Don't Panic!

Art - 3: Really not a fan of this week's art. Clark looks like three or four different people, the expression on Brainiac's face when he and Garth are greeting Superman seems pulled out of my wisely forgotten high school sketch book, and generally it lacks for depth and feeling. It's not a total loss, just underwhelming.